Sasha Menu Courey, a former University of Missouri swimmer, committed suicide in 2011 after she was allegedly raped by one or more members of the school’s football team, ESPN’s Outside the Lines reported.

Here’s what you should know about her and why her story is now making headlines.

Menu Courey took her own life by ingesting 100 Tylenol pills at a suburban Boston hospital on June 17, 2011, the Columbia Tribune reported.

Sasha’s parents, Mike Menu and Lynn Courey, hope the death of their daughter can spark change in the way schools and universities respond to allegations of sexual misconduct and how they care for athletes in a vulnerable mental state.

I don’t want to blame anyone. All I want is to change some things. I love my daughter. It’s really difficult when you lose a kid. I don’t wish this to anyone. We want the people that were part of it that may have made some mistakes, now there’s a chance for everyone to make positive changes so that it doesn’t happen to someone else.”

“I don’t want to blame anyone. But a lot of people need improvement.”

According to the ESPN report, Menu Courey and a male friend returned to his apartment in February 2010 and had consensual sex after a night of drinking. Although the details of what happened that evening are not entirely clear, documents obtained by Outside the Lines reveal that Menu Courey believed she was sexually assaulted by at least one person, allegedly a football player.

Menu Courey’s account of that night, via ESPN’s report:

[We] were falling asleep & then i heard the [door] open & some other guy walked in & locked the door & i couldnt really see who it was & i never saw a face the whole time…. but i remember just sitting upright in bed at the sound of someone walking in. & i just remember feeling really scared thinking that the two guys had planned this or something. so my first thought was figure out who this other person was in case so that if i needed the informaton i would have it later… the guy told me his name & then he pulled down his pants & put on a condom & just knew i was screwed …”

Menu Courey provided additional explicit details, including how she attempted to get in touch with a former boyfriend via telephone during the alleged assault.

… I started to panick & as i still on the phone trying to reach one of them tears start going down & the guy just lift up my dress & next thing i knew he inserts from behind. by that point tears were falling more but i wasnt loud & didnt anything. and then i just snapped and kind pushed him away & yelled no! and then he just left.”

Gil Moye, a former Missouri running back who left the team in February 2010, admitted to Outside the Lines having consensual sex with Menu Courey on the evening of the purported rape.

The report states that Moye initially agreed to an on-camera interview, but changed his mind, telling ESPN via text message:

I’m concerned about myself. I would like to help as much as I can, [but] it was a really touchy subject and is still wearing on me now. Again I’m really sorry but I have nothin to gain from doing this.”

3. She Suffered From Mental Illness

Prior to the alleged sexual assault, Menu Courey notified the Missouri athletic department that she suffered from “major depressive disorder” on her “Yearly Medical Appraisal” in August 2010.

Rhodenbaugh told Outside the Lines that he was unaware of the alleged rape, and elected to separate her from the rest of the swim team to encourage her to continue regular counseling.

At that point, she had stopped going to see counselors, was in a back brace and she couldn’t do what we were doing,” he said. “Swimming was something important to her, [so] we were trying to get her to go to the counseling.”

However, Menu Courey didn’t see it that way, according to the report. She felt as if she’d been “kicked off” the team, which exacerbated her pre-existing mental conditions.

In March 2011, she checked into the on-campus psychiatric center, where she was diagnosed with borderline personality disorder (BPD) during her 10-day stay, the Kansas City Star reported.

After being released into her parents’ care, Menu Courey attempted suicide in April 2011 by slashing her wrists at a local hotel. Police reportedly had to use a taser and pepper spray to confiscate the razorblade from her.

Menu Courey was hospitalized again and placed on a 96-hour involuntary commitment. While in the hospital — three days after her attempted suicide — Missouri athletic department staffer Meghan Anderson presented her with a University Withdrawal Form. The ESPN report states Menu Courey reluctantly signed the document, despite expressing a desire to continue school.

Outside the Lines obtained a copy of the form:

During her time at the campus hospital, Menu Courey informed a nurse, who later informed two doctors, of the alleged rape that she claimed had occurred the previous year. Despite these allegations of sexual misconduct, the university chose not to notify police or open an investigation.

Here is the intake form, obtained by ESPN, that outlines her account of the alleged rape to a school nurse:

Missouri responded to the Outside the Lines report on January 23, posting an e-mail exchange with ESPN in which it defends the actions (or lack thereof) taken after the rape allegations.

UPDATE, January 26: Missouri released a statement on Sunday saying the university police department has turned over to city police names and information about the alleged rape of Sasha Menu Courey. The school police chose to act after new information came to light in Friday’s Outside the Lines story.

The statement explains that Missouri was previously unable to launch an investigation because “there was no complaint brought forward from the alleged victim or her parents, and there was otherwise insufficient information about the incident.”

Missouri also provides the letter below, addressed to Menu Courey’s parents and dated January 28, 2013, asking if they had any information that would help identify the culprit(s) of the alleged attack and if they wanted an investigation to take place. The school says they did not respond.

According to Eagle 93.9, a radio station in Missouri, a Columbia police spokesman confirmed the investigation into Menu Courey’s alleged rape is underway, but admittedly difficult.

It’s very problematic getting physical evidence, because, you know, it’s been so much time that has passed. We’ll just have to take a look at the information that’s available and go from there.”

“Prior to Saturday, it hadn’t been reported to us by anybody, so it’s kind of hard when you’re almost four years behind of when it actually happened.”

5. ESPN’s Outside the Lines Aired Her Story on Monday

ESPN aired a special on Menu Courey’s story on Outside the Lines on Monday, covering Menu Courey’s descent to suicide and the alleged failure of the University of Missouri to investigate her accusations. 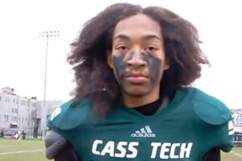