As protests continue to rock Ukraine over the country’s continuing economic ties with Russia, demonstrators and police are employing more and more violent tactics.

A video, which you can watch above, has surfaced of Ukrainian riot police battling incoming barrages of Molotov cocktails. Many of the police scramble to put themselves out as massive flames lick at their faces and torch their helmets. According the most up-to-date numbers, up to 80 police have been hospitalized in the clashes.

Last night the police had to face an unusual challenge as they attempted to take and dismantle a makeshift catapult that was hurling projectiles at their line. You can watch a video of that catapult above.

Wishing @ukr_catapult tweeted in English. I bet he has a story to tell. #Euromaidan #Kyiv #Ukraine pic.twitter.com/IxNe5BSBqe 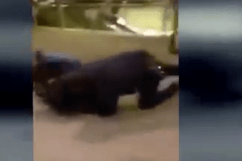