Trestin Meacham is a Utah-based member of the Constitution Party who is on day 12 of a hunger strike against gay marriage in his home state. Meacham announced his protest via blog post.

According to Meacham, he hasn’t eaten since December 21 and has lost 25 pounds.

2. He’s a Member of an Extremist Party

He’s a former candidate for the extremist Constitution Party. He ran for state senate in Utah in 2012 garnering 13% of the vote against a GOP candidate. The party opposes homosexuality, pornography, immigration and pursues an “English Only” philosophy.

3. He’s No Stranger to Homophobia

Meacham has stated his homophobic views on his Facebook page, saying:

The homosexual movement is less tolerant than the Nazis and if they had the power of the Nazis, I have no doubt they would not hesitate to march people of faith into ovens.

4. His Facebook Page Portrays Him as a Regular Guy

On this Facebook page, Meacham says his job is “Chancellor of exellence at I’m too pretty to work. and Sultán of Ambivalence at Michael Scott Paper Company.”

5. Gay Marriage Has Been Legal in Utah Since December

In December 2013, Utah legalized gay marriage citing the United States v Windsor case, which decreed that the government had not right to treat gay couples differently. 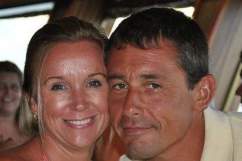 Loading more stories
wpDiscuz
0
0
Would love your thoughts, please comment.x
()
x
| Reply
Meacham has said he cannot stand by while evil takes hold of his state.