After Dennis Rodman’s unintelligible rant on CNN about his of love North Korean dictator Kim Jong-Un, this new footage continues to astound and perplex. Just before a U.S. vs. North Korea basketball scrimmage match in Pyongyang, Rodman took to the microphone and sang a rousing rendition of “Happy Birthday” to Kim Jong-Un in honor of his thirty-first birthday.

The stadium was filled with 14,000 people, according to FOX news, and Rodman called Un his “friend for life.”

Wait, watch that again. Does something seem familiar to you?

We’re not sure if Rodman loves Kim Jong-Un as much as Marilyn Monroe loved John F. Kennedy, but he is pretty committed to North Korea at this point. He even announced that he would be coaching North Korea’s Olympic basketball team. 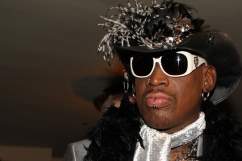