Yasiel Puig was arrested for reckless driving in Collier County, Florida, on December 28, according to TMZ.

The Los Angeles Dodgers outfielder was clocked driving 110 mph in a 70 mph zone, USA Today reported. He was arrested and taken to Collier County Jail, where he was released a few hours later on $500 bond.

The arrest footage was released on Tuesday, showing a handcuffed Puig — donning pink shorts and flip flops — being taken to the back seat of the police cruiser.

Check out the footage below:

The officer became upset with Puig upon discovering that his mother was a passenger in his white Mercedez-Benz — and proceeded to yell at the 23-year-old in Spanish. Meanwhile, Puig’s inconsolable mother was sobbing hysterically as she watched her son get arrested.

Another passenger, an unidentified male, got out of the car and walked toward the officer, who didn’t take kindly to his advances. The cop can be heard yelling “Get back in the car!” after the man takes roughly four steps in his direction.

Take a look below:

Puig faced similar charges in Tennessee last April when he was pulled over for allegedly travelling 97 mph in a 50 mph zone. However, prosecutors ultimately dropped the case, USA Today reported last November. 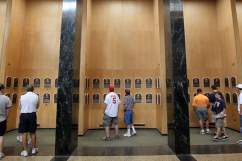