Chemical Spill Contaminates Water SupplyHundreds of thousands of residents can't use water during a state of emergency in West Virginia. *MORE: http://abcn.ws/1alSqWU2014-01-10T10:01:35.000Z

West Virginia is in a catastrophic state of emergency after a massive spill from a chemical plant spilled into the Elk River, affecting hundreds of thousands of people and rendering their tap water dangerous.

The spill came from Freedom Industries in Charleston, West Virginia. According to the company’s website it makes “a wide range of products to meet mining and water treatment industries’ needs.”

Here is what you need to know about this terrible crisis:

Thursday night, a “foaming agent” used in the processing of coal, leaked into the Elk River in West Virginia. The release hazardous chemical prompted the government to put out the immediate order not to drink, bath, cook with, or wash clothes with the tap water.

While Freedom Industries is yet to issue a statement, nine counties, Kanawha, Boone, Cabell, Clay, Jackson, Lincoln, Logan, Putnam, and Roane, have all been affected by the chemical spill.

It is still unknown exactly how much of the chemical has spilled into the river and some believe the leak may have been happening for a while before it was noticed.

2. Symptoms of the Chemical Include Nonstop Vomiting and Labored Breathing

The chemical, 4-methylcyclohexane methanol, isn’t lethal but can be very harmful to humans upon contact. It is especially harmful if inhaled or consumed, causing nonstop vomiting and troubled breathing. Symptoms for exposure are eye and skin irritation and blistering.

Many have said that the chemical smells like licorice or cough syrup and that the smell is obvious when coming in contact with water sources.

Yeah…I was one of the first people at Target. Be jealous…be very jealous! #somebodypoisonedthewaterhole #wv http://t.co/lOOIUq5kOl

NBC is reporting that after the governor’s declaration of emergency, stores immediately started selling out of bottled water.

Customers told the AP that the attempt to buy water was “chaos.”

4. Obama Has Declared a Federal Emergency

Above you can read President Obama’s press release declaring the situation a disaster. The government will be sending in nonprofit organizations and is allocate money to hazard mitigation.

There is also speculation that West Virginia will send in the national guard in order to distribute water bottles.

Sign at the rental car counter at Charleston Airport. pic.twitter.com/IJ72fK2JG6

5. Clean-Up Will Mean Flushing the Pipes

Here's the source of yesterday's chemical leak at Freedom Industries, a chemical distributor in Charleston. pic.twitter.com/9d91B9CWVT

The corp of engineers, West Virginia American Water company, and a number of chemists have been conducting tests on the river and water supply system in order to determine a course of action.

The president of the water company, Jeff McIntyre told FOX news that the next step would be to flush all of the pipes, “until we get out and flush the actual system and do more testing, we can’t say how long this will last at this time.” 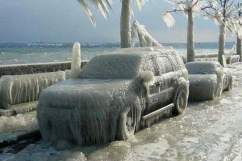 Frozen America: The Photos You Need to See

Read More
Breaking News, West Virginia
West Virginia is in a catastrophic state of emergency after a massive chemical spill contaminated the water in nine counties.