The Westboro Baptist Church has joined in one of the fiercest debates ongoing in the U.S. today. Should accused singer Justin Bieber, 19, be deported for his crimes against Miami streets? The monstrous church, taking time out from their picketing-funerals schedule, is demanding Bieber be removed from America. 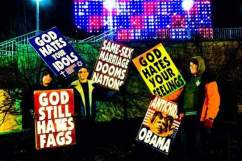 Then the monstrous church also compared the Biebs to Miley Cyrus:

Hey, isn’t @JustinBieber that girl who swings around on a wrecking ball in her undies? #Srsly http://t.co/eFs2GTwr5w pic.twitter.com/Lpk1gyYTRY

Seeing as tweeting is soooo-2013 for Westboro, they now put a lot of effort into some hideous Vines: 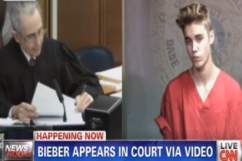