As many as 100 million Americans are in the path of a massive winter storm that will deliver record-breaking snowfall and temperature lows from the Midwest to the Northeast.

Winter Storm Hercules has already walloped Indiana and Illinois and is bearing down on the East Coast, expected to blast New York City on the afternoon of January 2.

Here’s what you need to know about this national weather emergency.

1. A Commuting Nightmare Is on the Way

One foot of snow has fallen in Michigan. (Twitter)

The Big Apple is bracing itself for 3-7 inches of snow, with much of it expected to fall during rush hour this evening. Gov. Andrew Cuomo issued a plea to New Yorkers to leave their cars at home to avoid massive pile-ups. The National Weather Service has also issued a blizzard warning for Long Island. It will take around 15 inches of snow however in order for the Long Island Rail Road to shutdown.

Winter Storm Hercules is on the move from the Midwest into the Northeast. The Northeast I-95 corridor will feel the worst impacts from Hercules Thursday evening into Friday morning. Gusty winds will combine with the snow to produce poor visibility and dangerous travel conditions. Localized blizzard conditions are possible on Long Island and in coastal parts of southeast Massachusetts.

2. The Storm Will Stretch as Far South as North Carolina

The Midwest has already suffered through 6-8 inches of snow in cities such as Detroit and Chicago. By the time Hercules dissipates, it will have reached as a far south as Washington D.C. and North Carolina with the nation’s capital bracing for two inches of snow.

3. Thousands of Flights Have Been Canceled

American Airlines proactively canceling flights for tonight and tomorrow morning in both NY/Boston area. Passengers can rebook without fee

Flightaware is reporting that 1,100 flights have already been canceled as a direct result of the storm. American Airlines have begun preemptively canceling flights for today and tomorrow, passengers can rebook with a fee. Bradley International Airport in Connecticut has already announced the cancelation of flights thru Friday. In Chicago, O’Hare Airport is reporting an average delay of over two hours for inbound flights due to snow and ice.

In addition to the snowfall records, temperatures are expected to drop to dangerous numbers. The National Weather Service is saying that estimates indicate average temperatures around the Midwest are at 20-30 degrees below normal. In a shocking finding, there is a massive 115 degree difference between International Falls, Minnesota and Key West Florida. Philadelphia, Baltimore and New York will all have single digit temperatures by Friday night.

It's really starting to come down out there. Lift your wipers up to make cleaning off your car a little less painful later on. #Hercules

5. At Least One Fatality Has Been Attributed to the Storm

The storm has been cited as the cause of numerous accidents in the Midwest. In Indiana, a bus carrying 15 passengers going to a casino crashed in Rolling Prairie, killing the driver and injuring others. 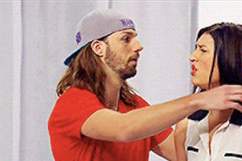 Read More
5 Fast Facts, Boston, Breaking News, Chicago, New York, Weather
As many as 100,000 Americans are in the path of a massive winter storm that is delivering record-breaking snowfall and temperature lows from the Midwest to the Northeast.