With winter storm Hercules dropping tons of snow and plunging temperatures down to single digits, the entire north east of the United States has been battered over the past 24 hours, reports Weather.com. Sadly nine people are believed to have lost their lives as a result of the Nor’easter with thousands more injured or stranded without power.

Here’s what you need to know about those who have lost their lives:

A 71-year-old woman with Alzheimer’s froze to death after wandering away from her home in the town of Byron, near Rochester, New York. Her body was found in a wooded area about 100 yards from her house by her husband with authorities saying she was not properly dressed for the conditions. At the time she was found at around 9:30 p.m. on January 2, the temperatures had plunged into the single digits. She has been named locally as Carol Magoffin. 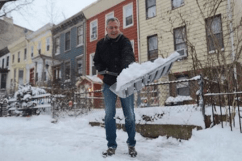 ‘Hercules’ Blankets NYC: The Best Pictures of the Snowy City

A woman was killed in Kentucky on the night of January 2 when she was hit by a car that was unable to stop in icy conditions. The woman has been named as Ruby Miles from near Barbourville in Kentucky where the accident happened. According to Kentucky.com, Miles’ car ran off road but she was not harmed. As she climbed back to the road to attempt to use her cellphone she was struck and killed by a car.

One person was killed in traffic accident on Interstate 72 in Macon County, that person is unidentified. A man, Carl Walker, 66, suffered a heart attack and died while operating a snow blower in Alton, Illinois.

William Lamoroeaux, of Plant City, Florida, died at the scene of a car crash when his SUV overturned into a field after skidding on the road. His 14-year-old cousin who was in the car escaped with a broken wrist. Another man, John Kallok, of Griffith, Indiana, died when his pick-up skidded into the path of an oncoming bus.

Just outside of Philadelphia, a worker in a storage facility was crushed by a 100-foot pile of salt that fell over and trapped him.

In Kensington, Pennsylvania, a driver was killed when he collided with a school bus. Some children on the bus suffered minor injuries. 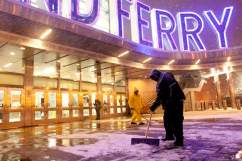 Read More
Breaking News, Deaths, R.I.P., Weather
9 people are reported to have been killed by the storm so far.