Wu-Tang Clan rapper Shyheim Franklin, 36, handed himself over to police on January 8 after being accused of leaving the scene of a fatal hit-and-run on New Year’s Day, reports Staten Island Advance.

According to police, Franklin ran a red light on Staten Island at around 5 a.m. on New Year’s Day. He then allegedly hit the car of Felipe Avila, 29, killing him. Avila was on his way to his bakery job. Franklin is accused of fleeing the scene, a Class D felony.

2. At the Time of the Crash, Franklin Was Out on Bail

According to reports, Franklin was arrested and charged in April 2013 after police searched his home in St. George, Staten Island (above), and found a revolver, Xanax, not to mention a sizable quantity of heroin in a safe under his bed. Before handing himself over to police, he made a video asking his fans for financial support to his legal defense:

3. He’s Had Plenty of Legal Trouble

In 2002, he did 16 months in the clink after being convicted of second-degree robbery, reports SI Live. He spent two years on Riker’s Island, an experience he called “tranformative” and “the best thing that ever happened to me.”

What winds up happening is you get older and priorities shift, I had the time to think and clearly see who was who in my life and I found out a lot of people who I thought loved me and were my friends and family weren’t. In that sense going to jail was really a blessing because I learned a lot about myself and (expletive) that was going on around me.

4. His Alleged Victim Died En Route to the Hospital on New Year’s Day

Staten Island Live reports that whoever was driving the car that hit and killed Feilpe Avila, ditched his car, a 2003 Volvo, and fled on foot from Lafayette Avenue and Cassidy Place (above). The only description of him was that he was a male with a blue hoodie. At the time of the crash, The Daily News described the driver of the Volvo as “heartless” for not remaining at the scene.

5. He’s Worked With The Biggest Names in Hip-Hop

Going back to 1995, when he shared the stage with Notorious BIG and 2Pac, Franklin has worked with them all. Most fans will know him for his work with the Wu-Tang Clan. His cousin is Wu-Tang mainstay Ghostface Killah. He made an appearance in the video for TLC smash hit single “Waterfalls,” not to mention movies like the Whitney Houston vehicle The Preacher’s Wife. 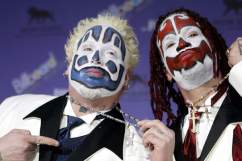