Terrence Ross was looking to defend the dunk contest crown against an impressive field of high-flying participants in 2014.

In one sense he did, as the East dominated the West in the 2014 NBA All-Star Dunk Contest. However, it was his Eastern Conference brethren John Wall — voted the “Dunker of the Night” — who really stole the show.

NBA legends Dominique Wilkins, Julius Erving and Magic Johnson served as judges for the event, which featured a different set of rules.

In the first round, the Freestyle Round, each dunker will have 90 seconds to do as many dunks as he wants. When that’s over, a panel of judges will then decide the winning conference.”

“The dunkers from that winning conference will get to choose whether to go first or second in the East vs. West dunking matchups that will take place in the second round, the Battle Round. Judges will pick the winner of each battle, with the first team to win three head-to-head matchups declared the winner of the competition. Yes, this means there will be no more 50s, just “winners.”

For a more comprehensive explanation of the rule changes, check out the video below from TYT Sports.

This year’s field of dunkers:

Find a complete recap of this year’s dunk contest below, including GIFs, videos and more.

The contest opened up with the freestyle round. The East won unanimously.

All three Eastern Conference representatives got involved for this dunk, which went from Ross to Wall to George.

Here’s a nice slam by McLemore.

And another by Lillard.

The Twitterverse wasn’t impressed with what they saw.

This dunk contest is letting me down right now.

No wonder why Lebron doesn't want to do this dunk contest

The East won a clean sweep all the way through, winning the battle round 3-0 over the West.

Ross, who plays for the Toronto Raptors, incorporated Canadian rapper Drake in his battle round dunk — a nice through-the-legs throw down.

Check out this pretty 360 through-the-legs jam by George.

Give Ben McLemore points for creativity, though. The Sacramento guard, donning an impressive-looking crown, leaped over legendary center Shaquille O’Neal — now minority owner of the Kings — sitting in a throne under the basket. The build-up was exciting, but the same can’t be said for the dunk itself.

Washington Wizards point guard John Wall was voted Slam Dunker of the Night. He brought the house down with this crazy double-clutch reverse jam over the team mascot.

Wall’s thunderous jam got the attention of the Twitter world, with some even claiming it saved the dunk contest.

His celebration was just as exciting as the jam itself.

Although the dunk contest certainly had its thrilling moments, the buzz on social media is decidedly negative. Here are a few of the many disappointed reactions around the Twitterverse.

Samer Kalaf of Deadspin described it as “hot garbage.”

New York Jets running back John Griffin offered a visual depiction of what it was like for him watching the dunk contest.

It’s clear the dunk contest doesn’t have the appeal it once did. In many ways, it parallels the NFL’s Pro Bowl. We saw some format changes benefit pro football’s version of the all-star game last month. The NBA must once again go back to the drawing board and try to re-write the rules to manufacture more excitement.

Here’s one proposition, from Nick Schwartz of USA Today.

2. Give each player three dunks per battle.

3. Have fans vote for the best dunker from each conference in the battle stage.

4. Have those players two face off to determine an overall winner.

Here's how you fix the Dunk Contest. 1) Three D-League guys get two dunks each. Winner gets the equivalent of a guaranteed deal for the year

3) NBA winner then decides – on camera – whether he wants to have a one-dunk contest vs the D League guy, double or nothing, for his stake.

But the real question is — can the dunk contest really be fixed at all? 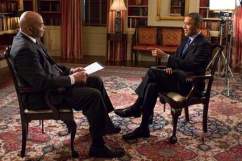 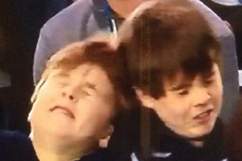 WATCH: Kid Gets Drilled in Head With Soccer Ball During NBA All-Star Weekend 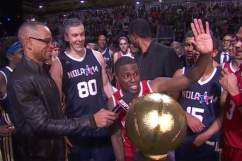