Disgraced NFL star Aaron Hernandez is alleged to have attacked a fellow inmate in Bristol County Jail, reports TMZ. The gossip site says that Hernandez beat up the prisoner “pretty badly” and that AH and the man had been “beefing all day.”

The exact circumstances of the fight are unknown as Hernandez was reported to have been in solitary confinement for his own protection. The former Patriots tight end has been behind bars since being charged with the murder of former-friend Odin Lloyd in June 2013. More recently, detectives have tried to link Hernandez to the murder of two men in Boston during the summer of 2012. 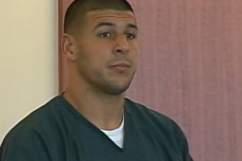 Loading more stories
wpDiscuz
0
0
Would love your thoughts, please comment.x
()
x
| Reply
According to TMZ, Hernandez had a beef with the victim.