Adelina Sotnikova, 17, took gold in women’s figure skating on Thursday, surprising the defending gold medalist Yuna Kim of South Korea on the strength of a stunning short form program that sent the crowd in the Iceberg Skating Palace to its feet.

Here’s what you need to know about Adelina:

1. She’s the First Russian Ever to Win Gold in Women’s Figure Skating

RT writes that Sotnikova’s victory makes her the first female Russian skater to earn Olympic gold in the history of the country (including that spot of time when it was known as the Soviet Union).

According to ESPN, Sotnikova came into Thursday just .28 behind Yuna Kim, the defending champion from South Korea.

Sotnikova pulled ahead of Kim by posting a 149.99 to Kim’s 144.19 in today’s free skate, after which Kim announced her retirement from skating.

Business Insider and USA Today both suggest that Sotnikova won on her program’s degree of difficulty, so that while Kim’s skate was perhaps more technically flawless, the slight stumble Sotnikova experienced on her final jump was compensated for by the complicated lutz-triple toe and double axel-triple toe combinations she was able to execute.

2. She Won a Gold Medal at Russian Nationals at Age 12

According to Golden Skate, Sotnikova began skating at age 4, when she asked her mother to take her to an ice rink near their Moscow home, out of idle curiosity. Sotnikova was immediately captivated by the skaters she saw there, and started lessons almost immediately.

Three years later, she entered the prestigious CSKA skating school, where she was coached by Elena Vodorezova.

Vodorezova told Golden Skate in 2011, “In general, talented children always stand out. Adelina is very goal-oriented and hard working. Athletes win you over with these qualities. You don’t have to explain things a lot. The athlete is on the same wave-length and that is a big plus.”

Sotnikova spent much of her training skating side-by-side with boys much older than her. She explained to Golden Skate that at first she was intimidated, but quickly became comfortable training with the big boys: “The very first time, though, when I trained with the boys, it was scary, of course. I thought they’d crush me, they were so fast. I was little, but then I got used to it and now I’m also fast.”

In 2009, at age 12, Sotnikova made her senior level debut at Russian Nationals, where she rocketed into the national consciousness by taking gold.

She told Golden Skate, “At the Nationals that time I just skated for myself. We didn’t plan on winning. I just was supposed to skate as well as I could and show that I can jump, and spin and skate, but apparently the judges put me into first place.”

3. Some Are Questioning Sotnikova’s Victory

USA Today writes in their post on Sotnikova’s victory, “Sotnikova was the surprise champion…beating defending gold medalist Yuna Kim despite a program that didn’t look as polished or clean.”

A separate piece from USA Today suggests that the crowd may have influenced the judges, writing “Listening to the [frenzied Russian] crowd roar every time Sotnikova landed a combination made her feel like the best skater.

Nonetheless, the piece argues that Sotnikova’s win is “debatable, but not a robbery,” continuing:

“Sotnikova skated well enough to win gold. She had a carefully constructed program with seven triples, five of which were in a combo. Kim had six and three, respectively. Thus, Sotnikova was going in with a higher total and made more margin for error, which she took advantage of with a minor hop after one exchange.”

4. Her Rise Was Overshadowed by Teammate Julia Lipnitskaia

USA Today writes Sotnikova was widely viewed as Russia’s best hope for gold in Sochi, after she won the junior world title in 2011. But a couple of inconsistent seasons, and the rise of 15-year-old Julia Lipnitskaia served to obscure her. Sotnikova was passed over for team competition, where Lipnitskaia’s short routine set to the theme from Schindler’s List, earned her headlines around the globe.

In a 2013 profile from Golden Skate, Sotnikova said she had learned to stop thinking about what people thought of her, saying, “I’ve stopped reading the internet forums three years ago.”

When not winning gold medals, Sotnikova is studying to be a figure skating coach at Russia’s Sports University.

5. The Russian Figure Skating Team is Experiencing a Revival

Before taking gold in Team Skating Sunday night, The New York Times reports Russia had been mired in a near-decade without any top-level women’s figure skaters.

This year, they had more than they could use. A handful of prodigies, all between 15 and 20 first attracted notice in the 2010-11 season, when the podiums of international junior competitions started looking conspicuously Russian. Since that year, a Russian has won, or come in second at every major international junior final.

The Times explains that in the wake of the USSR’s fall, Russia’s olympic training system fell apart as state financing fell through:

“That left rinks to rot and prompted many of the most experienced coaches to seek work abroad. At the same time, the pool of amateur skaters shrank as parents, struggling to stay afloat financially amid economic chaos, stopped sending their children to train.”

But in recent years, a more stable economy has allowed the parents of the country’s nimblest youths to reinvest in their on-ice education. While Putin’s government has kicked some money into figure skating in the last year or so, for the most part the crop of new talent has grown up organically through the efforts of coaches, families, and the skaters themselves. 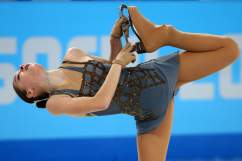