Amanda Kessel is a hockey player competing for the U.S. women’s team at the 2014 Winter Olympics in Sochi, Russia. She’s also a member of the Minnesota Golden Gophers women’s hockey team.

Here’s what you need to know about one of the rising stars of women’s ice hockey:

The Kessels are perhaps hockey’s first family in America. While Amanda — the youngest member of the Kessel clan — is a marquee player on the U.S. women’s national team, her brother is no slouch either. In addition to playing for the Toronto Maple Leafs of the National Hockey League, Phil Kessel is also competing for his country in Sochi as part of the men’s national hockey team.

Blake Kessel, the middle child, is currently a defenseman for the Orlando Solar Bears of the East Coast Hockey League.

Amanda said she enjoys training with her older brothers because it provides stiffer competition.

Per her Olympic profile at Sochi2014.com:

I always liked playing with boys a lot, just because, overall, boys are obviously bigger and stronger, and the competition is a little bit tougher.”

Watch Amanda discuss her love for hockey in the clip below.

In May 2013, Kessel was named the USA Women’s Hockey Player of the Year.

After leading the University of Minnesota to its second consecutive NCAA championship, she was awarded the Patty Kazmaier award as the best women’s college hockey player in March 2013. She led the nation in scoring with 101 points (46 goals, 55 assists) as a junior, becoming only the fourth player in NCAA history to reach the 100-point plateau in a single season.

Check out her best collegiate highlights below.

3. She Draws an Arrow on Her Left Hand Before Every Game

Amanda Kessel is the superstitious type. She draws an arrow on her left hand as a pre-game ritual. According to PattyKaz.com, she began to do it in 2012 as “a reminder to stay positive and to keep moving forward.”

The 22-year-old returned to action after spending two months recovering, but pain started to set in at the end of the 2012-13 NCAA season.

It was pretty brutal. I only had a couple more weeks of playing with it though.”

The nagging injury caused Kessel to stay off skates from October until January 2013 to ensure she would be ready for the Olympics. Nonetheless, she was still slightly concerned about her health heading into Sochi.

I was worried a little bit,” she said.

Fortunately, Kessel hasn’t shown any signs of wear and tear. She currently has six points (three goals) in four games, tied for the most on the U.S. team.

5. She Will Lead the U.S. Against Canada in the Gold Medal Game in Sochi

Not surprisingly, it will be the Kessel and the U.S. vs. Canada in the gold medal final at the 2014 Winter Olympics in Sochi. The puck drops at 12 p.m ET on Thursday, February 20. 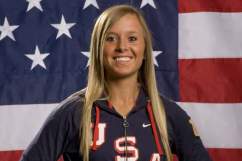 Loading more stories
wpDiscuz
0
0
Would love your thoughts, please comment.x
()
x
| Reply
Amanda Kessel has become a force to be reckoned with at the Sochi Winter Olympics.