Okay, this is getting out of hand. Ever since Flappy Bird’s creator Dong Nguyen announced that he was removing the game from ciruclation, there has been an outpouring of sympathy and tributes from addicted players. None maybe more bizarre than English soccer striker Cody McDonald who plays for Gillingham. He celebrated his lovely goal for the Gills with a composed tribute to the bird. McDonald began by pointing up to the sky, a la Frank Lampard, and then began flapping, reports 101 Great Goals. 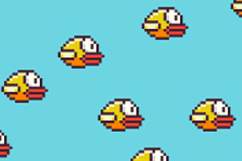