David Wise took gold in the first ever Olympic men’s half-pipe skiing competition in Sochi on Tuesday. He posted a 92.00 in his first run that proved strong enough to secure him the center of the podium.

Here’s what you need to know about Wise:

He won his first X-Games gold at 21, in the 2012 SuperPipe competition. Wise interrupted four years of French dominance in the event, sealing his victory with a switch double 1080 and double cork 1260 mute. Wise told ESPN:

“It’s been a Frenchy sweep for a while now, so to come out and ski well and have an all-North American podium is sweet.”

2. He’s All About Family

Wise’s wife Lexie gave birth to their daughter Nayeli in October 2011. Even when he’s pirouetting in the air above a half-pipe, love for his daughter keeps Wise grounded. He told RGJ: “At the end of the day, what I do for my daughter is way more important than what I do for myself.”

He told Powder Magazine he never thought he’d be the first one of his friends to get married but that “There’s just a moment when you realize that the person you’re with is the right person for you, and it’s never going to get any better, so there’s nothing else to do.”

He also talked about the difficulties of balancing fatherhood with olympic training, saying:

“I have to focus on whether I’m spending enough time talking to my wife and helping out when I’m around. Three weeks at home out of a six-month block is pretty intense, but it’s not impossible, either.”

He opened up about his fear of diapers:

“I was afraid of babies my whole life. So the first diaper I ever changed was Nayeli’s. You think it’s going to be weird and gross, but you just do it. It doesn’t bother you because that’s your kid, and there’s something kind of cool about that.”

Wise’s own parents are no less devoted. His father Tom Wise, mother Cathy, sisters Jessica and Christie all came out to his olympic debut, with home-made David Wise-themed merch, Tom Wise telling RGJ:

“We have special creative –very unique signs and custom knitted hats for David that were created by his wife and sister Jessica. We will be a PR rooting team for the U.S.A. and David.”

Wise told Powder that in his teenage years he read extensively, trying to figure out what he believed this world was all about. And then one day God spoke to him, and after that he “never really looked back or doubted my faith ever.”

While X-gamers are not known as an especially religious bunch, he said he found more believers among his competitors than he initially expected:
He went on to say:

“I don’t think there are as few Christians in this sport as you might think. That’s been kind of cool getting to know people like Kelly Clark, who’s a snowboarding phenom as a Christian and is very outspoken about it. And Jossi Wells and Andreas [Hatveit]. There’s a pretty solid group who are Christians and have their faith play into who they are as people.”

He characterized his life of piety as in a certain sense a truer rebellion in the ski world than that of the libertine:

4. Wise Is the Old Dog of Free-Style Skiing

A profile in SBNation, published at the beginning of this month, emphasized the 23-year-old Wise’s veteran status on the U.S. team:

“…it is the competitors still in their salad days — mostly skiers in their teens or having just turned 20 — who are intensifying the progression of the sport and have become the names to watch. Meanwhile, trying to keep the young pups at bay for at least another year, Wise is the old dog, still learning new tricks.”

Wise faired better than his younger teammates Tuesday, 19-year-olds Kyman Currier and 18-year-old Torin Yater-Wallace, both of whom fell on their opening runs. According to USA Today, Currier found his father in the crowd, telling him “It popped,” before “limping off in tears.”

The profile explains that the younger skiers have been constantly innovating newer, more complicated tricks, most famous among them the “double cork,” a jump involving two off-axis rotations, or “diagonal flips.”

Wise told SB that while he was working to keep up with all the new moves: “The guy who wins isn’t necessarily going to be the guy who’s doing the hardest tricks. The reality of our sport is that every aspect plays into who wins or loses. I think it’s really going to come down to who can do some of the most technical tricks, but also make them look smooth.”

Wise’s bib number for his gold-winning run was 9, which was fitting, since 9 is also the number he wears when playing basbeball. While he is competing at the height of freestyle skiing, he explained to Powder that the kind of baseball he plays is “just beer-league softball. I like pitching the most because it’s the most intense position. It’s the best mental training for me. You can be losing by 40 runs but you still have to hit the strike zone.” 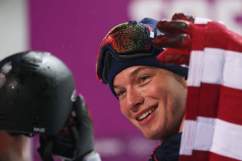