Devin Logan earned a silver medal for Team USA Tuesday morning, in women’s slopestyle skiing. Slopestyle is a new event for this year’s Olympics, following the half-pipe’s journey from fringe extreme sport to Olympic marquee. Logan navigated a series of jumps, boxes, and rails, on which she executed various tricks, while trying to maximize the altitude of her jumps. Here’s what you need to know about this 20 year-old Vermont native:

1. She Won the US Halfpipe Skiing Title In Her First Year of Competition

According to the Boston Globe, in 2011, during her first full year of competition, Logan won the US halfpipe skiing title and the Association of Freeskiing Professionals overall championship. She would claim that honor again in 2012, while racking up 12 podium appearances throughout the season. With a gold medal at the New Zealand World Cup halfpipe in August of 2012, Logan was an odds-on favorite to make the trip to Sochi. And then she took too much speed into a jump, and blew out her knee. She described the experience to the Boston Globe:

“I was doing cork-sevens all day. I must have turned up the music a little too loud or was going under a chairlift and wanted to show off. I took a little too much speed into the jump and went bigger than I anticipated. I knew right away when I landed on the tails of my skis that my knee was gone. I knew it would be a lot of work to get strong and get all my tricks back, but I thought Sochi was still there.”

2.She Used to Judge Freestyle Skiing

While Logan was recovering from her injury, she decided to keep her eyes on the prize, by looking at the sport from the perspective of the enemy. NBC writes that when AFP head Steele Spence invited Logan out to Utah for a judging clinic, she jumped at the opportunity. The experience of adjudicating runs at the North Face Park & Pipe Open, gave Logan new perspective on the event, telling NBC:

““I don’t give the judges any grief anymore.If I have a bad run or if I get scored badly I don’t even second-guess them anymore because I know just how difficult it is. I think of my skiing differently. I now have a judge’s mentality in the back of the head, like if I would do this, I just think of doing my run a little bit more carefully and what the judges would like to see and I definitely think that perspective on my skiing has helped me a bunch.”

3. Her Mother Started Cleaning Houses to Help Finance Her Dream

Making a run at the Olympics is incredibly expensive for the vast majority of athletes, too young and unknown to garner lucrative corporate sponsorships. A profile by NPR notes how getting Logan to the olympics was a family effort. Her mother Nancy told NPR:

“She went out, and she raised money on her own. We had fundraisers through my store. Her sisters helped. Her father helped. Her grandparents helped. So, it has been a family effort.”

Nancy held fundraisers through her small business, Wilmington Candle Co, in Vermont. When that proved insufficient, she started cleaning houses:

“I clean on the side. I clean condos, houses. Every little bit helps. If there’s a child with potential, you want to give them the best opportunity.”

The slopestyle course at Sochi has been a source of controversy, with some athletes claiming that the course is too dangerous. American snowboarding demigod Shaun White, dropped out of the slopestyle competition after sustaining injuries on a practice run. But Logan was nonplussed, telling NPR:

“This course isn’t all that bad. What we do is scary in general. But we know how to do it. Walking across the street can be dangerous.”

That laid back attitude seems to typify Logan, who holds herself to no strict diet or routine. She snacked on McDonald’s while hanging out between runs in the Olympic Village. Her pre-competition routine is “sometimes little more than jammin’ out to old school DMX songs.”

5. Next Week She Will Celebrate Her 21st Birthday in Vegas USA Today reported Tuesday morning, in the wake of Logan’s medal run, that her first destination after Sochi will be to take a birthday tour of America’s playground. Logan will turn 21 on February 17, and will do so with a silver medal, a bevy of best friends, and copious amounts of legally accessible alcohol. Logan told USA Today:

“I mean, it’s my first Olympic medal. I turn 21 on the 17th, so there’s definitely going to be some celebrating. Coming into this I kind of already planned a nice little birthday trip with all my friends to Las Vegas. So we’re going to have a blowout. Why not?” 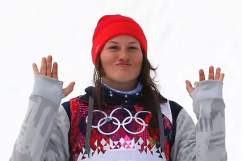 Loading more stories
wpDiscuz
0
0
Would love your thoughts, please comment.x
()
x
| Reply
Devin Logan is a slopestyle skier from Vermont, who just a silver medal for Team USA. Here's what you need to know about this twenty year-old former skiing judge.