As the violence escalates at anti-government protests in Venezuela, so too does the body count. The most recent death to draw media attention in the United States, is that of 22-year-old Genesis Carmona. She was shot in the head during a protest in central city of Valencia.

Here is what you need to know about this protest tragedy:

1. She Was Killed When Gunman Fired on Protesters

Carmona was participating in an anti-government protest in Valencia, Venezuela’s third largest city, on Tuesday, February 18, when the demonstration turned violent. The AP reported that just as National Guard troops began firing rubber bullets into the crowd, unknown gunman on motorcycles rode up and began to fire live rounds into the crowd.

Carmona was shot in the head and was rushed to the hospital by motorbike. Pictures taken of her limp body draped over a speeding motorbike have already become an iconic image of the conflict in Venezuela.

One website, Caracas Chronicles, is reporting that the armed motorcyclists are operating as government-backed paramilitary units.

2. She Was a Local Beauty Queen & College Student

Carmona was a university student studying tourism, a beauty queen, and amateur model. Her most touted accomplishment was her crowning as Miss Tourism 2013 in her native state of Carabobo. This role thrust her into the national, and international, spotlight as beauty queens are revered in Venezuela like sports stars, according to the Washington Post. 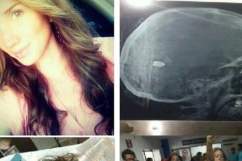 3. At Least 5 Have Already Died in Protests This Month

Reuters reports that at least five people have been killed as a result of the political unrest currently sweeping through every corner of the oil-rich nation.

At least three of those killed were shot during a protest in the capital city of Caracas, and another was killed after being run over by a car in Carupano.

4. She is the Second Beauty Queen Killed in Venezuela This Year

In January of this year, in the same state where Carmona was killed, 29-year-old beauty queen Monica Spear was killed along with her British husband. They were shot to death in an apparent robbery on a remote stretch of highway. Spear’s 5-year-old daughter was in the car and, although she was shot in the leg, she was the sole survivor of the event.

Spear won Miss Venezuela in 2004, and represented the nation at Miss Universe in 2005. 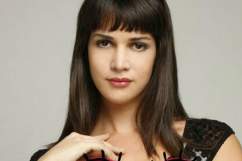 Leopoldo Lopez is the former mayor of Chacao, a Harvard-trained economist, and the opposition leader who is currently barred from holding public office and imprisoned. After giving an impassioned speech to a crowd of protesters in Caracas, Lopez turned himself over to police on February 18 after he was wanted for “inciting violence.”

Read More
Breaking News, Protests, Venezuela
Follow Heavy ↓
She was reportedly shot in the head during a protest by government-backed motorcycle gangs.