Italian bobsledder William Frullani, 34, has been sent home from the Sochi Olympics after testing positive for doping, reports The Associated Press.

His removal from the games was confirmed by Italy’s governing Olympic body, CONI. They said that they were informed by the IOC that Frullani failed a test, coming up positive for the banned substance, dymetylpentylamine, a stimulant, reports ESPN. The first test was taken on February 18, which Frullani failed, a second test was done on February 21, which he also failed. The bobsledder had requested the second test. Hours before an unnamed German athlete also failed a test for the drug.

Frullani works as a police officer in his day job.

3. Frullani Studied in the U.S.

4. The Italian Team Are in 17th Place

He was a brakeman in the Italian bobsled team. The team are placed 17th after the first heat at the Sochi games.

5. His Wife is a Multi-Sports Star Too

He is married to Ukrainian multi-sports athlete Hanna Melnychenko. She competed at the London Olympics in the Heptathlon where she placed in 10th. 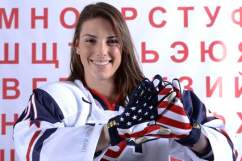 Loading more stories
wpDiscuz
0
0
Would love your thoughts, please comment.x
()
x
| Reply
In addition to his bobsledding, Frullani is also a decathlete in summer sports.