South Carolina defensive end Jadeveon Clowney is one of the top prospects in the 2014 NFL Draft. He put his freakish athleticism on display during the NFL Combine, logging a head-turning 4.47-second unofficial 40-yard dash on Monday.

Here’s what you need to know about one of the nation’s most electric young football players:

1. He Played 3 Seasons at South Carolina

Clowney played for Steve Spurrier at the University of South Carolina for three years from 2011-2013. He declared for the 2014 NFL Draft after the Gamecocks’ 34-24 victory over Wisconsin in the Capital One Bowl.

He tallied 24 sacks, nine forced fumbles and 130 total tackles — including 47 for loss — during his tenure in Columbia.

His most memorable play, of course, was this bone-crushing hit on Michigan running back Vincent Smith during the 2013 Outback Bowl.

Clowney is generally agreed to be the top-rated defensive end prospect in the 2014 NFL Draft.

Watch his best collegiate highlights above.

3. His Work Ethic/Commitment is His Biggest Question Mark

There isn’t one NFL scout who denies the freakish athleticism of the 6-foot-5, 266-pound Rock Hill, South Carolina, native. However, some analysts have pegged Clowney as lazy and uncommitted.

NFL Network’s Mike Mayock, in particular, has questioned his will and determination entering the professional ranks.

I think there are red flags there.”

Clowney’s stock may have dropped marginally after he didn’t quite have the flashy junior season that many were expecting. Part of it was due to injuries, but there was also a perceived indifference and lack of enthusiasm that seemed to follow the 21-year-old in 2013.

South Carolina head coach Steve Spurrier, who has typically been one Clowney’s biggest defenders in the face of criticism, didn’t exactly sing praises when asked about his star defensive end’s work ethic, telling NFL AM:

He was OK. It wasn’t like Marcus Lattimore, you know, every player is a little different. His work habits are pretty good, they’re not quite like Lattimore, maybe Stephon Gilmore, Melvin Ingram, some of those guys, but when the ball is snapped he’s got something no one else has.”

4. He Comes From Humble Beginnings

Clowney was raised by his mother Josenna, who works as a processing technician at a Charlotte, North Carolina, Frito-Lay plant, Sports Illustrated reported.

5. He’s Singled Out the Atlanta Falcons as a Favorable NFL Destination

Could Jadeveon Clowney be wearing an Atlanta Falcons jersey this fall?

It’s not the likeliest of scenarios, given Atlanta picks sixth in the 2014 draft and he is projected by most to be off the board within the first five selections.

But that didn’t stop Clowney from campaigning for the Falcons to trade up to pick him.

He told ESPN in February:

I wish they could trade up for me, but I hope I don’t fall to No. 6. I like Atlanta – a lot. They’re pretty good. They’ve got some guys from South Carolina on the team, also. And it’s close to home.”

Falcons general manager Thomas Dmitroff didn’t rule out the possibility of trading up.

I’ve said that from Day 1 since 2008 that I always want to have the light on for business. I never want to be one of those teams that people pick up the phone and they quickly throw the phone back down and hesitate to reach out thinking that we’re not going to be straight up. Whenever you’re able to cultivate trades, it’s about being honest with people in your dealings. And I think that we’ve done a nice job with that. And we’re always going to be open for business.” 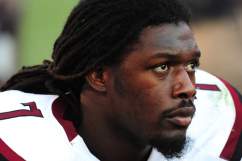