Indiana Pacers shooting guard Lance Stephenson is among the biggest snubs from the upcoming NBA All-Star Game in New Orleans.

Stephenson, who’s averaging 14.2 points, 5.4 assists and 7.2 rebounds per game this season, was outspoken about his frustration with not being awarded a roster spot on the Eastern Conference All-Star team.

The day after learning of his All-Star rejection, Stephenson voiced his anger to the Indianapolis Star:

I’m mad. I feel like I had my breakout year last year. I showed I can play with anyone on the floor and I felt like this year, I brought a little bit more to my game.

His resentment continued to build into the weekend, eventually boiling over into a pledge to destroy everything in his path.

Before Saturday’s 97-96 win over the Brooklyn Nets, Stephenson again vented his mounting frustration to the media — this time to Stefan Bondy of the New York Daily News:

I already had a chip on my shoulder and it made me even worse. Now I’m going to kill everybody who is in front of me.”

As it turns out, Stephenson meant it when he said he would stop at nothing to put his dynamic skills on display. Playing with more fire in his belly than usual, the 23-year-old Brooklyn native inadvertently posterized an official during the second quarter of Saturday’s game at Bankers Life Fieldhouse in Indianapolis.

Stephenson was driving the ball to the basket when the ref called a foul and signalled for play to stop. But the 6-foot-5, 230-pound guard apparently didn’t hear the whistle and went in for the emphatic slam — despite the official standing directly in his path.

Stephenson finished the game with 14 points, seven rebounds and four assists in 35 minutes. 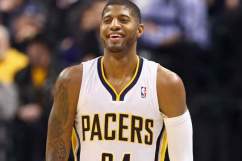