Matthew Mills is the man who interrupted Malcolm Smith’s post-game press conference after Super Bowl XLVIII. NJ.com’s AJ Perez was the first to identify him.

Who is Mills and why did he hijack the Super Bowl MVP’s press conference?

1. He Believes the US Government Perpetrated 9/11 and He Wants You to Know The ‘Truth’

Mills is an independent journalist and self-described 9/11 truther, living in Brooklyn. The 9/11 Truth Movement disputes the results of the official investigations into the attacks on September 11, 2001.

Here is an excerpt from 911 Truth’s mission statement, per the organization’s website:

TO EXPOSE the official lies and cover-up surrounding the events of September 11th, 2001 in a way that inspires the people to overcome denial and understand the truth; namely, that elements within the US government and covert policy apparatus must have orchestrated or participated in the execution of the attacks for these to have happened in the way that they did.”

Mills, having infiltrated the post-game presser, took the opportunity to hijack the microphone from Super Bowl MVP Malcolm Smith for four seconds, and wake up all us sheeple, saying:

Investigate 9/11. 9/11 was perpetrated by people within our own government.”

When asked why he did it, Mills told NJ.com:

I just saw my opportunity to get my word out there and I took it.”

Mills is reportedly affiliated with WeAreChange, a “nonpartisan, independent media organization comprised of individuals and groups working to expose corruption worldwide,” per the group’s website.

2. He Got Into the Super Bowl Without a Ticket By Saying He Was Late

According to the NJ.com report, Mills initially intended to get close to MetLife Stadium to conduct fan interviews.

Wearing press credentials from a festival he had covered in the past, Mills allegedly boarded an employee bus at Seacaucus Junction and blended in with media members, team employees and others working the event.

The 30-year-old claims to have successfully circumvented security by using the simplest of subterfuge when scrutinized.

I just said I was running late for work and I had to get in there. It was that simple.”

“I didn’t think that I’d get that far,” Mill said. “I just kept getting closer and closer. Once I got past the final gate and into the stadium, I was dumbfounded.”

3. He Was Arrested for Trespassing

Mills reportedly left the area without incident and was subsequently arrested for criminal trespassing. He was released on his own recognizance a few hours later.

Per the NJ State Police, the 9/11 "truther" is Matthew Mills, 30, from Brooklyn (sigh). His media affiliation was listed as "unknown."

One Twitter user, @TrueNameBrand, claims to be a former classmate of Mills’. He tweeted the following 1998 yearbook picture Monday afternoon:

Among the more supportive reactions:

What Matthew Mills just did is put #Investigate911 into the main stream allowing ppl to talk about it with each other once again.

Matthew Mills is my Hero! He was arrested and thrown in JAIL! What happened to his rights! 1st Amendment! FREEDOM OF SPEECH #Investigate911

Matthew Mills is the man who called for a 9/11 investigation on live television! Salute to you my man!

But then again, there are those who weren’t as impressed with Mills’ courage to question the U.S. government.

5. The Winning Super Bowl Coach is Also a 9/11 Skeptic

Adding another layer of weirdness to the whole episode, is the fact that Seahawks coach Pete Carroll is himself widely suspected of being a 9/11 truther. Last spring, retired general Peter Chiarelli visited Pete Carroll at Seahawks headquarters. A lifelong Seahawks fan, Chiarelli’s post military work has been focused on traumatic brain injury research, and so it seemed that he and Carroll would have plenty to talk about, without getting into questions of controlled detonation. In Chiarelli’s re-telling, the conversation started normally enough, SB Nation writing:

The sit-down between Chiarelli and Carroll started off normally enough. They talked about the team, and then about head trauma. Chiarelli, who commanded the American forces in Iraq during Operation Iraqi Freedom II, talked about the brain injuries he had seen there. But Chiarelli’s mention of Iraq sent Carroll in another direction: He wanted to know if the September 11 attacks had been planned or faked by the United States government.

In particular, Carroll wanted to know whether the attack on the Pentagon had really happened. Chiarelli—who was the top-ranking Army official inside the Pentagon when American Airlines Flight 77 crashed into its western side—explained that it had. He said he had lost many colleagues. But Carroll didn’t stop there. He ran through the whole 9/11 truther litany.”

Among the more bizarre aspects of this conversation, is Carroll’s apparent assumption that, if the government had succeeded in orchestrating an elaborate terrorist attack against its own people, and managed to keep all involved silent for the past 12 years, all it would take to end the madness would be to ask this general insistently enough, and then the former Vice Chief of Staff of the Army would just throw his hands up and say: “You got us!”

With the Super Bowl being held just outside of Manhattan, many in sports media thought Carroll should have been made to answer for/clarify his beliefs. But no reporter on Media Day chose to go down that road.

This 2005 series from Popular Mechanics provides a thorough debunking of the 9/11 conspiracy theories.

However, in light of the responses/comments and insights from readers — and the overall positive reaction to Mills’ actions during the press conference — it’s evident that, at the bare minimum, “truthers” are owed more answers to these grave allegations.

Several readers have pointed to this video, called “9/11: A Conspiracy Theory” as a brief, but compelling resource highlighting why skeptics such as Mr. Mills are reluctant to buy the story the American government is selling the public regarding 9/11. The video currently has more than 2 million hits on YouTube.

To most Americans, the notion that the government could commit acts of terror against its own citizens to inspire changes in the electorate’s attitude toward foreign policy is ludicrous.

However, it’s not nearly so far-fetched as some would have you believe.

In 1962, Americas top military leaders from the Defense Department and the Joint Chiefs of Staff submitted a series of proposals for false flag terror attacks, designed to bend the democratic will toward a land invasion of Cuba. The Kennedy administration rejected the proposals, and they went undisclosed to the public until May 2001.

The plans were developed as ways to trick the American public and the international community into supporting a war to oust Cuba’s then new leader, communist Fidel Castro.

America’s top military brass even contemplated causing U.S. military casualties, writing: ‘We could blow up a U.S. ship in Guantanamo Bay and blame Cuba,’ and, ‘casualty lists in U.S. newspapers would cause a helpful wave of national indignation.’

Regardless of what you believe happened on September 11, 2001, Mills has helped to re-awaken the public and generate some discussion about the events of that fateful day. Not to mention, the fact that Mills was able to interrupt a live press conference on national television raises serious concerns in itself.

How did someone without proper credentials breach numerous security barriers and get inside the press conference in the first place?

Hopefully this harmless incident will spur improvements in security operations at these high-profile events.

But if there’s one thing to take away from Mills’ four-second hijacking of the Super Bowl press conference, it’s this: It’s perfectly acceptable to question what you’re told by the powers that be. A healthy skepticism is not only a good thing, but one of the most important pillars of a healthy democracy. 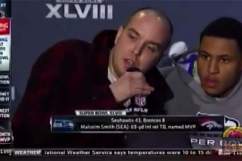 Loading more stories
wpDiscuz
1
0
Would love your thoughts, please comment.x
()
x
| Reply
Matthew Mills is the man who interrupted Malcolm Smith's post-game press conference to urge for an investigation into the terrorist attacks on 9/11.