Former Miami Dolphins offensive lineman Richie Incognito keeps findings ways to damage his image — and his car. With the unflattering results of the Ted Wells report barely in his rearview mirror, TMZ is reporting that Incognito smashed his Ferrari with a baseball bat.

So far, nobody knows what set Incognito off.

TMZ captured video of the aftermath. The vehicle — a Ferrari FF worth roughly $300,000 — appears to be parked in the front yard with part of the bat stuck in the grill. Watch above. 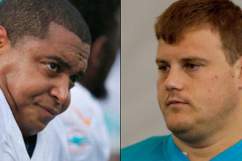 The Ted Wells Report: 5 Fast Facts You Need to Know