Gunman at the Simferopol airport. (Getty)

Reports from inside Ukraine, including from Ukraine’s acting president Oleksandr Turchynov, are saying that Russia has launched a full invasion of Crimea, a state in southern Ukraine. Crimea shares a border with Russia and its Russian ethnic majority is strongly pro-Russian, pro-Putin, and in support of the ousted president Yanukovich.

Russia will most likely defend any military action by declaring defense of Russian sympathizers in Crimea against the western-leaning interim government. Russia is also invested in Crimean politics as its Black Sea fleet is stationed at the Crimean city of Sevastopol.

Although Russia has yet to comment on any military activities, Turchynov released the statement:

He has also instructed Ukrainian troops and servicemen in Crimea not to engage with gunman of any kind.

Here is what you need to know about this emerging international incident:

For over a day now, the world has wondered if Russia was planning an invasion of Crimea. Now, it appears that they are. A tweet from the AFP reported that 2,000 Russian solders have launched an “armed invasion of Crimea. You can watch a video below of alleged Russian military helicopters flying over Crimea.

Special representative to Crimea: thirteen Russian aircraft land at base near Sevastopol with 150 people on each

This news comes after numerous eye-witness accounts claimed to see ground personnel carriers, planes, and helicopters from Russia landing across Crimea, particularly outside Simferopol and Sevastopol. At around 3:57 p.m. the BBC reported that the Ukrainian head of police in Sevastopol resigned.

Last night, armed gunman sporting no national or recognizable insignia took over two airports in Crimea, a commercial one near Simferopol and a military one outside Sevastopol.

While these gunman had no identifying marks, they were reported to be speaking Russian. These troops barricaded the Crimean parliament building (which you can see in the image above), hoisted a Russian flag above the building, and raised a sign that said “Crimea Russia.”

Over the last few hours, the airspace over Crimea was reportedly closed, causing Ukrainian airlines to cancel all flights into or from the region.

Meanwhile, unidentified “militiamen” as the Wall Street Journal is calling them, have set up checkpoints on the two highways that connect Crimea with mainland Ukraine where the anti-Russian Euromaidan protests have usurped the pro-Russian president Yanukovich.

On Ukrainian TV, acting prez @Turchynov says Russia trying to annex Crimea. Things on a collision course if both sides keep up this rhetoric

In a rare emergency meeting, the UN security council will meet today to discuss options of action on the situation in Ukraine.

The AP points out that action, or even a consensus, is not likely from the security council because Russia is a, according to the AP, “veto-wielding permanent member” of the council.

5. The U.S. Is Demanding That Russia Back Down

The United States has already warned Russia that any military intervention in Ukraine would be a “grave mistake.” The U.S. State Department has reportedly been in contact with the Russian government and has made their desires for a peaceful resolution known.

It is unknown at this time how the United States could potentially respond to a full ground invasion of Crimea, but economic sanctions, rather than military intervention, will most like be the first course of action. 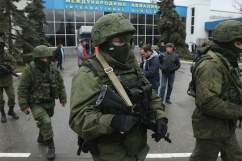 What’s Happening in Crimea? Top 10 Facts You Need to Know

Loading more stories
wpDiscuz
0
0
Would love your thoughts, please comment.x
()
x
| Reply
Reports from inside Crimea say that at least 2,000 Russian troops have landed in Ukraine.