Sage Kotsenburg is a slopestyle snowboarder competing for the U.S. in the 2014 Sochi Winter Olympics.

Originally from Coeur d’Alene, Idaho, he first displayed his undeniable talent to the world when he won the 2009-2010 Winter Dew Tour overall title in slopestyle at the ripe age of 16.

Here’s what you need to know about Kotsenburg as he makes his Olympic debut in Sochi.

1. He Bears an Uncanny Resemblance to Jeff Spicoli From Fast Times at Ridgemont High

Kostenburg looks an awful lot like Jeff Spicoli from the 1982 classic teen comedy Fast Times at Ridgemont High. In fact, according to USA Today, the 20-year-old uses the same lingo like “gnarly” and “stoked.”

Here’s one of the classic Spicoli scenes from the film.

4. His Whole Family Loves to Snowboard

Sage was born in Idaho, but grew up in Park City, Utah, with his parents Steve and Carol Ann, older brothers Blaze and Jeremy, and younger sister Kirra — all of whom love to snowboard.

He began riding with Blaze when he was just five years old. Steve, who works in Park City as a real estate agent, routinely filmed and traveled to contests in support of his talented son.

5. He’s One of the Most Stylish Snowboarders on Tour

Kotsenburg has the reputation of being one of the most stylish riders on tour, according to USA Today. His Monster Energy bio describes his snowboarding style as having “incredible consistency and a level of technical ability that goes far beyond his years.”

He won the final Olympic qualifier in his hometown of Park City, scoring three points ahead of the remainder of the field. Watch below. 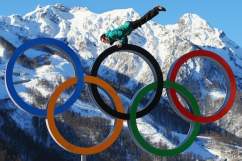