Although everyone had their own favorite, last night Best in Show at the Westminster Dog Show was awarder to Sky, a 5-year-old Wire Fox Terrier. The 138th Westminster Dog Show went on this week in front of thousands of spectators and dog lovers packed into Madison Square Garden in New York City.

Here is what you need to know about Sky and the event:

Sky was no stranger to winning before being named Best in Show late Tuesday night. Already the winner of two prestigious kennel club “Best in Show” titles, Sky was favorite to win last night. According to the Wall Street Journal, in Las Vegas the betting odds were in Sky’s favor with a 10-1 chance that he would take home the title.

2. This is the 14th Time a Wire Fox Terrier Has Won

This is the 14th time in the 138 years of Westminster Dog Show that a Wire Fox Terrier has taken home the title, making it by far the most awarded breed in the show’s history. Terrier, as a larger category, have won the show a staggering 46 times.

3. The Second Place Winner Is a Poodle

The second place price, and the title of Reserve Best in Show, went to a large standard poodle from New York named Ally. Ally was handled by handler Tim Brazier.

4. This is the Second Win for Handler Gabriel Rangel

The happy man you see above is Sky’s handler Gabriel Rangel. Last night’s win makes two Best of Show titles for the expert handler. Ragel won in 2010 with Sadie, a black Scottish terrier.

He told the New York Times on Tuesday night that Sky was “the little perfect dog,” adding, “We love her. She knows she did something good. She’s a princess dog.”

5. The Crowd Favorite was the Blood Hound

Anyone who watched the event can tell you that the crowd favorite was, by a large margin, Nathan the bloodhound. Loud cheers would erupt every time he was in the spotlight or a camera happened to catch his droopy face.

Nathan was considered a big underdog as no bloodhound has ever won Best in Show. 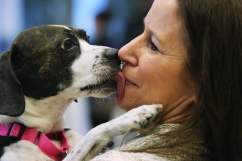 Puppy Love: The 25 Cutest Pictures From the Westminster Dog Show