So every year, thousands of eager young actors and actresses looking for their first taste of professional, paid work PAY to attend these auditions—sometimes flying to Memphis just for the opportunity, too. Each individual has about 90 seconds on-stage in an auditorium filled with theatre representatives from all over the United States. Sounds like a great way to not only network but get work too, right? Every kid’s dream to get in with a theatre company.
After the mass audition exodus, theatres put up lists of numbers representing auditioners whom they’d like to “callback”, AKA audition again for their particular season of shows.
Unfortunately, attendees had to bear witness to this while looking to see if they had any callbacks.

No, not “prepare a monologue from Leviticus.” Look again:

Let that sink in for a second.

Furthermore, as someone notes on the Facebook thread, the theatre wants auditioners to sing from Hair, a rock musical about hippie counterculture in the sexual revolution of the 1960s.
Equally mind-blowing is that it’s 2014 and this bullsh*t is still practiced—and at a theatre. But then again, 50-years-ago this was still going on in Tennessee:

UPDATE: An alleged friend of an UPTAs spokesperson contacted the Facebook-user who shared the original above photo, saying that it was a “horrible, tasteless prank” and that UPTAs was investigating—and that Gatlinsburg Christ Dinner Theatre does not exist and has no affiliation to another Tennessee theatre of a similar name, the Biblical Times Dinner Theater. However, there was a sighting that an official UPTA staff member was seen putting up the callback list. Prank or not, a definite blemish on professional theatre. 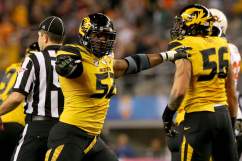 Michael Sam Comes Out as Gay: All the Photos You Need to See