Hayley Wickenheiser will lead Team Canada out of the tunnel and into the Sochi Olympics during Friday’s opening ceremony, bearing the flag of the red maple leaf. Wickenheiser has competed in International women’s hockey for Team Canada for two decades. Sochi will be her fifth Winter Olympics, her first four outings having been good for three gold medals and one silver. Here’s what you need to know about the woman widely considered the greatest female ice-hockey player the world has ever seen:

1. She Played in Her First World Championship When She Was 15

Ten years later she took the ice at the World Championships of Women’s Hockey in Lake Placid, New York, as a member of Canada’s National Women’s Team. She played three games, picked up one assist, and Canada took home the gold. She has racked up seven World Championship gold medals and three silvers in the 20 years since.

In 1998, Wickenheiser was a member of the first Canadian’s women’s hockey team ever to play in the Olympics for medal contention. She was named MVP of Olympic tournament in 2002 and 2006.

Wickenheiser’s dominance comes from the completeness of her game. A profile from the International Ice Hockey Federation describes her talents:

“A powerful skater, she has speed and finesse and possesses unquestionably the hardest shot in the game. Part Wayne Gretzky, part Al MacInnis, she is, quite simply, a force of unequal talent in the women’s game.”

2.She Is the First Woman to Play Full-Time Professional Hockey*

*In any position other than goalie.

In 2003, Wickenheiser became the first woman to score a goal in a men’s professional league, while playing for a team in Finland’s Division 2 pro league. She stayed on with the club for 40 games of the following season, recording 3 goals and 16 assists. Some criticized the team’s signing of her as a publicity stunt, but there were several men on the team who put up less than 19 points.

3. She Was Recently Stripped of Her Captaincy

Wickenheiser is now 35, and 2014 may be her final Olympics. She’s coming off a disappointing World Championships where, beset by a torn MCL, a broken bone in her foot, and a back problem, she was limited to only three games during which she failed to record a point. Wickenheiser told CBC that she had to have an injection to play in the final, saying:

“I couldn’t feel much in my right leg. It was a challenge. I don’t regret giving it a go, but I really didn’t do much.”

Wickenheiser will no longer be Captain of the Canadian Women’s Hockey Team this year, replaced by forward Caroline Oullette, who at 34, is just one year Wickenheiser’s junior. Team Canada’s general manager Melody Davidson explained to CBC that the decision reflected a desire to groom the team’s future leadership, and in consideration of Wickenheiser’s other obligations at the Olympics, where she is running for election as Canada’s nominee to the IOC Athlete’s Commission, an organization that advocates for athlete’s rights.

Having been caught up in International Hockey competitions since age 15, Wickenheiser took the unconventional step of competing for the first time in college hockey, after already collecting multiple olympic medals in the sport, when she enrolled at the University of Calgary in 2010. Wickenheiser had wanted to go back to school for a while, but her attempts to compete in professional men’s hockey overseas, and her responsibilities toward her young son Noah kept her away.

She is studying kinesiology, and hopes to go to medical school when her hockey career is done. Not that she’s in any way ready to be done, telling CBC:

“I don’t think of slowing down. I think of how I can still get better. As soon as I stop feeling that way I’ll know it’s time to go. I talked with lots of retired NHL players and they have told me to never quit until they rip your skates off you because you’ll always miss playing the game. I love to play and come to the rink. When the off-ice work stops being enjoyable, that’s when you probably want to hang it up and move on.”

Wickenheiser played softball for Team Canada in the 2000 Summer Olympics in Sydney, Australia, where she boasted the team’s highest batting average. This was unfortunately not the most competitive distinction, as the team went 1-6 that year.

Her Olympic appearance marked the culmination of a long career in the sport. In 1994, she played in the Canadian Midget Nationals, where earned the titles of All-Canadian shortstop and Top Batter.

She hasn’t competed in softball since the end of the Sydney Olympics.

5. She Is An Outspoken Advocate for Gay Rights

The Toronto Star wrote a profile of Wickenheiser, shortly after she was named flag bearer this January, arguing that her selection was “tough to dispute.” The most plausible competing candidate may have been Sidney Crosby, star center for the Pittsburgh Penguins, and the captain of Team Canada’s men’s team. However, when asked about trumping Crosby in a teleconference after her selection, Wickenheiser argued that the honor of bearing the nation’s flag might be most appropriately assigned to an athlete for whom the Olympics are the ultimate stage:

“For a lot of Olympic, amateur elite athletes, the Olympics is the stage. For us, in women’s hockey, the Olympics is our Stanley Cup. It’s what we play for, every four years, it’s what we strive to be — it is everything.So I personally do think the flag-bearer should represent those athletes that live most of their lives in this arena of amateur sport and elite sport outside of professional sport. But having said that, I look at our men’s hockey team and someone like Sidney and think that someone like him carrying the flag . . . well, every single Canadian would be so proud to see him walk into that stadium, for what he does for hockey around the world.”

The Star reports that Wickenheiser has been “outspoken about her displeasure over Draconian efforts aimed at marginalizing, in some regards-homosexuality in Russia.” Considering this fact, Wickenheiser speculated that her selection as flag bearer might be a pointed statement, saying:

“Hopefully, me as a choice to be flag-bearer wasn’t to send a message to anyone. But I think what I represent is certainly a lot of the topics that have been discussed . . . I’m a big believer that the Olympics should be about including everyone and treating everyone with respect in the spirit of fair play and dignity for everyone.

I am certainly supportive of every athlete being able to compete, regardless of race, gender or orientation, and I will carry that Canadian flag proudly believing that I am representing all the athletes that feel that way.” 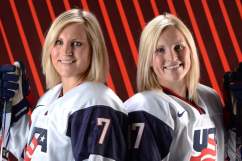 Read More
Breaking News, Canada, Sochi Olympics
wpDiscuz
0
0
Would love your thoughts, please comment.x
()
x
| Reply
Hayley Wickenheiser will be the flag bearer for Team Canada in Sochi. Here's what you need to know about the greatest female hockey player of all time.