Jonathan Quick steps on to the ice for Team USA. (Getty)

After the U.S. women coughed up a two-goal lead late in yesterday’s gold medal game, it was up to the U.S. men to even the score against Team Canada in Friday’s Olympic hockey semifinal. 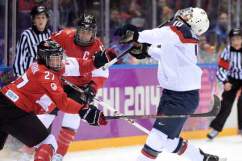 I feel u, bros. pic.twitter.com/Edm1jN0FMV

Team Canada kept the Americans scoreless for 60 minutes, advancing on Jamie Benn’s lone goal in the second period. Canada will face Sweden, who beat Finland 2-1 in Friday’s other semifinal, for the gold medal.

And if you thought the stakes couldn’t get any higher in this clash of hockey superpowers, you were wrong. It appears Justin Bieber’s citizenship was on the line too.

Do we really have to keep him?

All jokes aside, the Americans will still have a chance to bring home some hardware from Sochi. Head coach Dan Bylsma will have to get his team motivated to play Finland in the bronze medal game on Saturday at 10 a.m. ET. 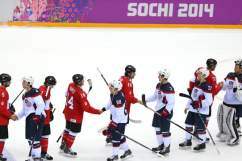 Here’s a complete recap of Canada vs. USA, including the best videos, GIFs and pictures.

We’re underway at the Bolshoy Ice Dome in Sochi. Phil Kessel got a great look on goal in the first minute of the game when he got behind Canadian defenseman Duncan Keith, but failed to get a shot past the virtually impenetrable Carey Price.

2. Carey Price is a Beast Early

Beast mode engaged. The U.S. has generated some great chances early, but Carey Price has continued his dominant play early in this semifinal game. Price has saved seven shots, several in spectacular fashion, in the first seven minutes of the game.

American goalie Jonathan Quick has held his own as well. He has saved all six shots that have come his way through the first eight minutes.

Ryan Suter is called for holding. Canada will get the game’s first power play. Quick makes a few nice saves and Team USA is able to kill the two minutes of penalty time.

Patrick Marleau is penalized for holding. The U.S. went to the power play, where they were 3 for 11 heading into Friday’s game. The Canadians killed off the penalty with ease, as the Americans failed to fire one shot during the one-man advantage.

An atrocious power play. This one's not looking good.

5. No Score After 1st Period

All 14 goals for Canada in this tournament have been scored by Western Conference players.

Bouwmeester is credited with the assist.

Ryan Getzlaf is called for high sticking. The U.S. got its second power play of the game, but failed to even the game with the one-man advantage.

Chris Kunitz heads to the box for slashing. Again, Team USA struggles on the power play as Canada kills off the two minutes with relative ease.

Canada kills off U.S. power play, holds on to 1-0 lead with less than two minutes left in 2nd period

The Canadians are 20 minutes away from sweeping Team USA in both men’s and women’s ice hockey. Can they hold on for one more period?

The U.S. came awfully close to tying the game when Patty Kane’s shot was almost re-directed past Carey Price on the rebound.

Ryan Callahan, well, he did his best. (Getty)

TeamUSA mistakes: 1. Coaching; no spirit; no power play; 2. Captain: Should have been Ryan Callahan; 3. No Kyle Okposo.

11. Canada Heads to the Power Play

Phil Kessel is called for hooking and heads to the box for two minutes. Team Canada was looking for an insurance goal, but the Americans were able to kill off the penalty.

#TeamUSA's Phil Kessel will serve a 2-minute penalty for hooking. #TeamCanada back on power play.

The Americans didn’t get the revenge they were looking for against Team Canada. Mike Babcock’s team put together an impressive shutout of the most potent offensive team in Sochi, coming away with a 1-0 victory.

The Canadiens will play Sweden for the gold medal. The U.S. will take on Finland with the bronze medal on the line.