Despite his claims that he would not resign, this morning the Ukrainian parliament impeached the embattled President Yanukovich. This decision comes amid the months of violence and a death toll of at least 75 protestors and police.

Here is what you need to know about this work changing story:

1. Parliament Declared Him Unfit to Lead

According to European news outlet RTE, parliament members applauded and sang the national anthem this morning as they voted to impeach the president and former prime minister Viktor Yanukovich. The vote asserted that he was seen as constitutionally unfit to carry out his duties as the nation’s leader.

After two feeble truces between the opposition and the embattled government, this impeachment becomes one of the first and most important concessions on the part of the Ukrainian authorities. After the vote, cheering could be heard in Independence square where violence between security forces and protestors has been ragging since November.

22. Emergency Elections Have Been Called for May 25

In their meeting this morning, the Ukrainian parliament set emergency elections for a new president for May 25, leaving candidates three months to prepare.

3. The Opposition Leader Is Free

The decision to hold special elections comes just as the Yanukovich regime has allegedly let political opponent Yulia Tymoshenko free from the military hospital where she has been detained since she was arrested in August 2011.

This morning protestors stormed the unoccupied presidential compound. Yesterday, Yanukovich left Kiev for eastern Ukraine which makes up his base of support.

Protesters told the media that they would be guarding the palace until the next president comes along, and to prevent Yanukovich from returning. Among the things in the presidential compound the protestors are now enjoying are the presidents private zoo, his karaoke machine, and the president’s files on dissenting journalists and activists.

A day at the Zoo, the President’s private zoo in In open house courtesy of the revolution
pic.twitter.com/CTsixqIXzJ

After this week saw two of the bloodiest days in the country’s recent history, world leaders are anxious to end the violence as the death count passes the 77 people. 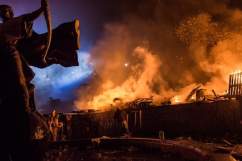 Read More
Breaking News, Protester, Ukraine
wpDiscuz
0
0
Would love your thoughts, please comment.x
()
x
| Reply
The embattled President Viktor Yanukovich of Ukraine has been impeached by the parliament and elections have been set for May 25.