Among the finds, as reported in a protester’s blog, were:

Ancient icons and paintings stolen Gospel, Holy Relics in the office, Faberge eggs around the house, a collection of knives, numerous awards, portraits Pshonka and Yanukovych, and much more.

But the find that has the social media world abuzz is the hilariously PhotoShopped picture of Pshonka as a Roman Emperor.
The original image, taken from the film Asterix at the Olympic Games, is seen below.

The question on many people’s lips is, Why? For a man who seemed to have immeasurable wealth, he could easily have hired a painter to accomplish a much better quality portrait.
Regardless, it just goes to show that the Ukrainian revolutionists are right about something: their politicians were out of touch.
Pshonka has fled Ukraine for presumably Russia. 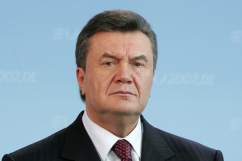 Loading more stories
wpDiscuz
0
0
Would love your thoughts, please comment.x
()
x
| Reply
This guy might have a bit of an ego. Just maybe.