The media has been inundated with stories of about infrastructure surrounding the Sochi winter Olympics and how hastily it was built. There have also been a number of stories about all of the stray animals roaming around the Olympic grounds and Russia’s forceful attempt to exterminate them. Well, the new video, which was taken in October 2013 and posted to Liveleak earlier this week, combines the two stories.

In the footage, which you can watch above, a stray cat falls through the ceiling of the Adler Arena, Sochi’s speed skating venue. The small cat causes a major collapse of the ceiling and scampers away unharmed.

Does that look like a stable ceiling to you? 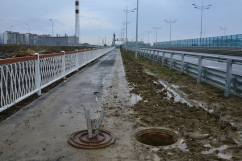 Loading more stories
wpDiscuz
0
0
Would love your thoughts, please comment.x
()
x
| Reply
Caught on CCTV video, a cat is scene falling through, and partially collapsing, the ceiling of the Olympic Adler Arena in Sochi, Russia.