Tonight in a live debate from Kentucky’s Creation Museum Bill Nye the Science Guy will attempt the futile, to convince a staunch creationist that evolution is correct. Nye will be facing off against Ken Ham, the CEO of “Answers in Genesis” and the founder of the Creation museum.

Here is what you Need to Know:

1. You Can Watch the Video Here

The event was live streamed from the Creation Museum via Youtube and you can watch it above. The event begins at 6:55 p.m. and its official description on Youtube read:

Is creation a viable model of origins in today’s modern, scientific era? Leading creation apologist and bestselling Christian author Ken Ham is joined at the Creation Museum by Emmy Award-winning science educator and CEO of the Planetary Society Bill Nye

2. Bill Nye is Currently the CEO of the Planetary Society

Bill Nye has come a long way from his days as an Emmy-winning children’s science show host. Nye is now the CEO of The Planetary Society, a science-based nonprofit aimed ad advocating for increased scientific education and funding the public sector. Above you can watch Nye’s call to President Obama for increased funding for NASA.

3. Nye Wrote to CNN to Explain the Debate

In an article published this afternoon by CNN, Bill Nye explained his reasoning with debating with a person whose education has not been grounded in science.

In short, I decided to participate in the debate because I felt it would draw attention to the importance of science education here in the United States. What keeps this country in the game economically is our ability to innovate. New ideas lead to new technologies, which drive new businesses and new opportunities. Technological innovations absolutely cannot be created without fundamental understanding of science, the means by which we know nature.

You can read his full response here.

4. Ken Ham is the Author of Numerous Religious Books

Ken Ham, 62, is an Australian creationist who believes that the Earth was created around 6,000 years ago. He is the author of a number of books on the subject and serves as the president of Answers of Genesis and the Creation Museum.

In 2012, Bill Nye posted a video on Youtube entitled “Creationism is Not Appropriate for Children,” in which he expressed his shock and dismay that the United States could be simultaneously so technologically advanced, and yet so backward in terms of its large population of creationists. You can watch that video above.

One week after Nye’s video, Ken Ham posted his own video entitled “Ken Ham Responds to Bill Nye ‘The Humanist Guy.” You can watch his response below. 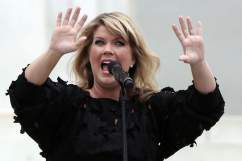 Why Did Christian Singer Natalie Grant Storm Out of Grammys? 5 Fast Facts You Need to Know