Protests in Ukraine continued to escalate today as riot police attempted to destroy the protester camp in Independence Square. The scuffle led to the camp burning to the ground and as many as 13 dead, including six police.

In the video above you can see an alleged attack by protesters who blew up an armored police vehicle. 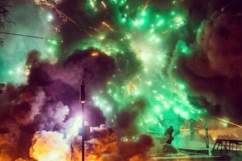 What’s Happening in Ukraine? Top 10 Facts You Need to Know