Nearly 3,000 of the world’s fanciest dogs will descend on New York City on Monday and Tuesday to show of their fur and operant conditioning to patrons at the Piers 92/94 and Madison Square Garden, and to a global television audience. Here’s what you need to know about the 138th annual Westminster Kennel Club Dog Show, and what’s new for 2014:

1. For the First Time, Mixed Breeds Will Be Allowed to Compete

On Saturday, the show opened with the first ever Agility Trials competition, an event that evaluates dogs for the beauty of their movements, rather than their haircuts. As such, it is the first event in which mixed breed dogs have been allowed to compete.

However, it was a purebred border collie that took top honors on Saturday, though a husky mix named Roo!, who had been adopted and returned to animal shelters several times before San Francisco-based trainer Stacey Cambell sorted her out, was one of the standout competitors.

2. The Show is The Second Longest Running Sporting Event in the US

The only older, continuously running event being the Kentucky Derby.

According to Wikipedia, in 1875, a group of hunters who met regularly at the Westminster Hotel decided to create a Kennel Club so as to pit their trusty gun hounds against each other in a pageant.

The show was first televised in 1948.

This year, 190 different breeds of dog, from all 50 states, some from as far as Australia or Japan, will compete for the title of Best in Show. The judging results will be broadcast Monday night on CNBC, from 8-11, and Tuesday night on the USA network over the same time span.

The top 5 most popular dogs in America, according to the American Kennel Club are the Labrador Retriever, German Shepherd, Golden Retriever, Beagle, and Bull Dog.

Except for a beagle named Uno, who took Best in Show in 2008, none of those breeds has produced a Best in Show winner within the last 20 years. According to ABC News, this is in part because those breeds are considered “honest dogs,” that don’t require the sort of fancy grooming the show is tailored to reward. So while labradors and goldens may be first in America’s hearts, in Westminster’s record books terriers are number one.

1. The shows encourage breeding. The entire purpose of the show is to evaluate breeding stock, and thus spayed or neutered dogs are not allowed. Lin argues that this create a culture based on breeding, showing and selling dogs, in the pursuit of a champion, and, “with three to four million cats and dogs killed in shelters every year, the last thing we need is more breeding.”

2. In valuing purebred dogs above all others, the show encourages inbreeding, which leads to considerable health problems in those most popular breeds.

Dog blogger Mus Musculus has a post displaying, with side by side photos just how much these breeds have changed in the past 100 years, largely for the worse in terms of their health, strength, and ability to function independently.

3. As stated above, the valuing of purebreds accompanies a devaluing of mutts, that leads to a kind of dog pound eugenics where only the purebreeds get adopted and survive.

5. There Is No Cash Prize for the Winner

Instead, the winning owner tends to cash in by breeding the puppies out of her stud or vixen. According to ABC, this year’s top contenders are: “Sky the wire fox terrier, Matisse the Portuguese water dog, Swagger the old English sheepdog, Riley the Irish water spaniel and the Fifinator, a Doberman who has her own Facebook page.”

Here you can watch a livestream of all the action:

For a satirical take on the show, check out this clip from the 2000 Christopher Guest comedy, “Best in Show”: 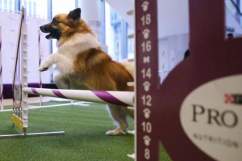 Where and How to Watch Westminster Dog Show

Loading more stories
wpDiscuz
0
0
Would love your thoughts, please comment.x
()
x
| Reply
This week New York City will host the 138th annual Westminster Dog Show. Here's everything you need to know about all the breeds, events, and controversy.