Remember the name. Iouri Podladtchikov is the man who won gold in the Sochi Olympics snowboarding halfpipe defeating Team USA’s Shaun White. The American had been heavily, heavily, favored to win the gold, with Iouri expected to be one of the also-rans. But it wasn’t to be, the Swiss Iouri astounded the crowd in Russia to win comfortably. The Japanese teenage pari of Ayumu Hirano and Taku Hiraoka but in great performances too to ensure that, shockingly, Shaun White didn’t even place for a medal of any metal.

Here’s what you need to know about the toast of snowboarding:

Helping him win the gold was the successful landing of his signature move, the “YOLO.” The move, according to ESPN, involves a “total of 1440 degrees of spin.” The degrees are made up of two 360 spins and two head-over-heels spins. ESPN goes on to say that when Iouri debuted the move at an event in 2013, “Shaun White watched on his computer and knew what he had to do next.” And White tried, and failed, to perform a “YOLO” during his run. His two attempts at the move resulted him landing on his butt. In his first run, Iouri scored 86.5, putting him in the medal running, then in the second run he broke out into first place with a score of 94.75.

2. He’s Named After an Apple Product

His nickname is “I-Pod,” simply based on the first initial of his first name and the first three letters of his last name.

He has switched nationalities. Iouri was born in Mosco in 1988 but grew up in Davos, Switzerland where he began boarding. At the age of 17, he competed for Russia at the 2006 games in Turin (where he ranked 37), the same year he switched his nationality to Switzerland.

4. He Shares a Distinction With Shaun White

Iouri and Shaun White have constantly drawn comparisons by fans. The two snowboarders are the only two in the world to have completed the “Double McTwist 1260.”

5. Iouri’s Parents Are Not Snowboarding Fans

His parents were not supportive of their son’s choice of occupation. With his mother a mathematician and his father a geophysicist, it’s probably safe-to-say that there was a lot of emphasis put on academics. According to NBC Olympics:

At every dinner table I’d have to hear how it’s stupid what I do. It’s the opposite story of what usually happens when someone gets good at something and you get the support. It was even worse because as I was getting better and better they were saying at some point I’d have to stop and forget the crap. But I have such a stubborn head, I just kept going. 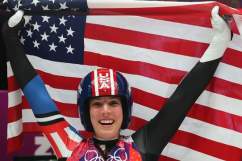