Johnny Weir is an Olympic figure skater turned commentator, whose audacious, Hunger Games-inspired outfits have been a highlight of NBC’s coverage, helping viewers forget about Bob Costas’ terrifying red eyes. Here’s what you need to know about Weir:

1. He Called LGBT Protestors Calling for a Sochi BoyCott ‘Idiots’

Back in December, Weir was invited to Barnard College to talk about why he believes boycotting the Sochi Games, in protest of the Putin government’s anti-homosexual agenda, is ultimately counterproductive to advancing gay rights. AsVocativ reported, the event got rather tense at points, particularly after Weir referred to four LGBT protestors outside the lecture hall as “idiots.”

Weir explained that growing up as an aspiring figure skater in rural Pennsylvania, he became a bit of a Russofile, obsessing about this odd foreign culture that birthed so many incredible skaters. He admitted that his view of the country, from the perspective of a child, and then of a visiting American celebrity might be somewhat blinkered, saying:

He at first tried to downplay Russia’s anti-gay propaganda laws, by describing them as a “no-anal-sex-in-front-of-children’s-libraries situation.” When informed by the audience that the laws were so severe that even mentioning the existence of homosexuality in front of a minor could get a person arrested, Weir apologized:

“I apologize, I misspeak, if I’ve offended anyone in this room, sometimes I make bad comparisons, so thanks for pointing that out.”

This pattern of Weir attempting to mollify the concerns of his critics with humor, before apologizing and thanking them for their input, carried throughout the evening.

The protestors outside held up a sign that read: “Weir Russian Olympic Clown” and “NBC: Naive Bloody Collaborators.” Weir seemed to refer to them when making his most full-throated defense of the Games:

“If I had to watch the U.S. cave to idiots dumping vodka on the street…there are athletes who have given up years of their lives and thousands of dollars [to attend the games]. The minute I even heard the word boycott, I was almost anti-American in response to having to be so anti-Russian.”

Longtime gay activist and reporter Andy Humm confronted Weir during the Q&A, in a moment Vocativ described as ‘iconic.’ He accused Weir of insulting four activists whose combined “100-plus years of experience” in protest had won Weir his right to be married.

Weir defended his right to say something after having been attacked, but then apologized, and sent out the following tweets later in the night:

While Weir has been reluctant to engage in discussion of Russia’s domestic politics, his gender bending on-air outfits have been viewed by many LGBT supporters as its own anti-Putin protest:

Johnny Weir's outfit is a big time middle finger to Putin and his cronies. Work those leather pants, Johnny. Do you.

Weir narrowly missed the podium in the 2006 and 2010 Olympic games, coming in fifth, and sixth respectively.

Weir retired last October, after an especially bad fall during training. He told the students gathered at Barnard that, while lying on the ice he told himself: “you’re a tired old bitch, you’re done.”

Weir immediately took a job as a commentator with NBC.

“This may not be politically correct, but do you think he lost points due to his costume and his body language?” Mailhot said.

Goldberg responded that Weir’s graceful mannerisms take the muscle out of male figure skating and damage the sport.

“They’ll think all the boys who skate will end up like him,” he said. “It sets a bad example.”

The commentators went on to suggest that Weir take a “gender test” and go compete against the ladies. Weir spoke out against the comments in a press conference, explaining that his decision to call attention to the homophobic announcers was out of concern for children who may have been influenced by their banter:

“Even my gender has been questioned. I want that to be public because I don’t want 50 years from now more young boys and girls to have to go through this sort of thing and to have their whole life basically questioned for no reason other than to make a joke and to make people watch their television program. I hope more kids can grow up the same way that I did and more kids can feel the freedom that I feel to be themselves and to express themselves. There’s a whole generation of people that aren’t defined by their sex or their race or by who they like to sleep with. I think as a person you know what your values are and what you believe in, and I think that’s the most important thing.”

Still, Weir didn’t officially come out as gay until the release of his 2011 memoir, “Welcome to my World.”

He explained that his decision was inspired by a few heavily covered gay teen suicides, that made him realize the value of his modeling a proud and comfortable attitude towards his orientation.

4. He Has an Asteroid Named After Him

Weir first became interested in figure skating when he was 11-years-old, after seeing Russian phenom Oksana Baiul take gold in the 1994 Olympics. This was the spark in Weir’s long-standing love affair with Russian skating and culture. Weir has taught himself to read and speak the language.

That love was reciprocated in 2010, when some of his most ardent Russian fans convinced an astronomer to name a newly discovered main-belt asteroid after him.

Weir has enjoyed a prolific career as a reality television celebrity. The Sundance Channel ran one season of a documentary on his life called Being Johnny Weir, which aired in early 2010. A second season was aired by Logo in 2012.

He has since made appearances on The Racheal Zoe Project, Skating with the Stars, RuPaul’s Drag Race, and Say Yes to the Dress, among other shows.

In April 2010, he released a pop single titled “Dirty Love”: 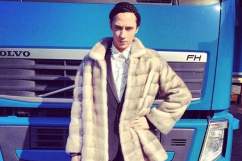 Johnny Weir Photos: All the Pictures You Need to See

Loading more stories
wpDiscuz
0
0
Would love your thoughts, please comment.x
()
x
| Reply
Johnny Weir is NBC's very gay figure skating commentator, whose flambouyant outfits have been an early highlight of the Sochi Games. But what does Putin think?