Elytte Barbour, 22, is the husband of Miranda Barbour, 19, the admitted teenage serial Craiglist killer. Miranda Barbour claimed in an interview with The Daily Item newspaper that she had killed over 22 men over a six year period in different states. In some cases the killings were related to a satanic cult that Miranda Barbour joined when she lived in Alaska.

Here’s what you need to know about her significant other:

Elytte Barbour brought to Northumberland County Court for Craigslist murder. We are live at 5. pic.twitter.com/B9i0NKZDsH

Elytte Barbour is also facing the death penalty for his alleged role in the killing of Troy LaFerrara, 42, in Pennsylvania on November 11 2013. Investigators believe that the Barbours killed LaFerrara in a “thrill kill” to celebrate their three week wedding anniversary. The couple lured LaFerrara, after meeting him on Craigslist and offering him “companionship,” to a secluded spot in Sunbury, Pennsylvania where he was stabbed to death. The autopsy showed that LaFerrara had been stabbed 20 times and found in an alley in Sunbury.

2. His Lawyer Wants Him to Be Tried on his Own

Miranda Barbour just arrived at Northumberland County Courthouse for her 9am prelim. pic.twitter.com/tmMqQ81Z6X

Prior to his wife’s claims of mass killing, Elytte Barbour’s lawyer, James Best, wanted the married couple to be tried together in a consolidated trial. Now he’s not so sure, Best told The Daily Item:

I have no idea if any of the allegations are true.But all that alleged behavior occurred before she met my client.

A lot can happen between now and then, and it already has.

3. Elytte Will Be Evaluated by a Shrink

I’m hoping the psychiatric evaluation that was approved for Mr. Barbour will be held within the next month.

I’m still waiting for discovery evidence from the district attorney’s office. I realize there’s a voluminous amount of information they need to gather before making it available to the defense attorneys.

According to The Daily Item, Elytte told detectives that he and Miranda had planned to kill before but never found the opportunity.

The couple were into satanism according to Miranda Barbour’s former roommate. The man, who chose not be identified, told The Daily Item that cops took a satanic bible from Miranda Barbour’s former room. The apartment, that Miranda and Elytte, was searched in November as part of the investigation into the murder of Troy LaFerrara. The roommate added that “Elytte was not a satan worshipper.”

5. Elytte Has a Daughter in North Carolina

He has a kid with another woman, Aimee Vaneyll, in Coats, North Carolina. When she was contacted by The Daily Item, she said that Elytte was obsessed by Satanism. She said: “People will say he was a devil worshipper. That isn’t true. What he believed in was satanism. Satanism isn’t about being scary. It’s about believing in yourself, and not oppress the instincts you were born with.”

In her interview, Vaneyll added that Elytte loved to play video games such as Silent Hill and Skyrim. 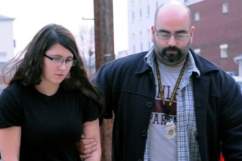