Naya Sala, 11, is the fifth grader who has become a celebrity after being featured singing the Arabic part of Coke’s controversial Super Bowl commercial (above), reports NBC Bay Area.

The commercials features one of America’s most beloved songs being sung in eight different languages representing America’s cultural make-up.

Here’s what you need to know about the breakout star:

1. Salah is the Student Body President

She’s a student at Palo Alto’s Stratford Elementary School. Not only is she a student but she’s also the student body president. The school posted a message of support on their website on the Monday after the Super Bowl. The school’s message read:

Naya Salah, our Student Body President at Stratford School in Palo Alto, sang “America the Beautiful” in Arabic as part of a Coca Cola commercial that ran during Sunday’s Big Game. We’re so proud of you, Naya!

2. She’s the Toast of Her Community

Her school’s Facebook page has been littered with comments congratulating her.

3. Salah Says, ‘We Should Always Be Friendly to Each Other No Matter What Difference You Have’

She co-coherently explained her belief in the commercial’s message saying:

America is one union but with a mix of cultures, and it doesn’t matter who you are. We should always be friendly to each other no matter what difference you have.

4. There Has Been a Vile Response on Twitter to the Commercial

Here are some of the tweets that appeared after the commercial appeared during the Super Bowl.

Safe to say I'm never drinking coke again after they sing an american song in another language for the damn super bowl, buncha pricks

Coke you MESSED up! America the Beautiful is ENGLISH sung! NO MORE COKE FOR THIS FAMILY!!! #Cokesucks

Complete disrespect by coke. "America the beautiful" in arabic is not ok! Why would you think that would be good with america. #cokesucks

Disappointingly, the comments section on the video’s YouTube page has been disabled.

5. The Debate on the Commercial is Set to Continue

The commercial will continue air all through the Sochi Olympic games which began on February 6 in Russia. As ad remains on TV, the debate is likely to also intensify. 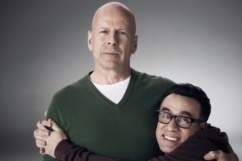