Kaitlyn Farrington is a snowboarder competing for the U.S. in the 2014 Sochi Olympics. She won the gold medal as a major underdog in the ladies’ halfpipe event. The victory gave the U.S. just its third gold of the Games.

Here’s what you need to know about this 24-year-old Idaho native.

1. She Won Gold in the Women’s Halfpipe

Farrington took the gold in the halfpipe competition at the Sochi Olympics with a score of 91.75. She was a surprising winner in the event, triumphing over a field consisting of three former gold medalists.

After winning the competition on Wednesday, Farrington took to Twitter to thank her fans and supporters.

Holly cow…This is unbelievable! Thank you so much everybody for the support threw this long bumpy… http://t.co/kwIMaO3B6K

Learn more about her gold medal run below.

Farrington bested fellow American and 2002 gold medalist Kelly Clark, who landed the only 1080 of the contest and finished with the bronze in Sochi.

Australia’s Torah Bright, the reigning gold medalist, took the silver in Sochi with a score of 91.50. American Hannah Teter, the 2006 gold medalist in the event, finished fourth.

3. Her Mom Taught Her to Snowboard

Farrington says her mother taught her how to snowboard on Baldy Mountain in Sun Valley, Idaho when she was roughly 11 years old.

According to USA Today, Farrington, who was raised on a ranch, began skiing at age 3 and barrel racing at 5.

She took the bronze medal in the Women’s Snowboard SuperPipe event at January’s X Games in Aspen. Watch her final run in the competition below.

4. She Trained on an Olympic-Size Pipe in Her Hometown

Farrington was fortunate enough to have an Olympic-size pipe to train on in her hometown of Sun Valley, Idaho.

It awesome that Sun Valley has stepped up and built a 22′ pipe. It now allows me to have the option to go home and ride. I had to move out to Salt Lake City just because there wasn’t a pipe.”

5. She’s Been Nicked and Bruised Quite a Bit

Farrington’s snowboarding career didn’t have the storybook beginning. On one of her first slope contests, she took a tumble and dislocated her knee. To add insult to injury, she had to drag herself down the mountain to get help.

One of my first slope contests, I fell in my run and dislocated my knee. No one was around so I forced myself down the run and when I got to the bottom everyone was waiting. I collapsed and was balling my eyes out, one coach grabbed my upper body and the other my leg and just yanked… all you could see was my whole leg shift back into place. That was a crazy moment for me!”

Unfortunately for Kaitlyn, this wouldn’t be the last injury she suffered in the snow.

According to her Sochi 2014 Olympics profile:

In June 2009, Farrington underwent her third knee surgery after tearing her meniscus in Mammoth, California. She returned to snowboarding at the New Zealand Open in August 2009.

In early 2012, Farrington broke her wrist, and again required surgery. She closed out the 2011-12 season wearing a cast to protect the injury. She has had five total wrist operations during her career.

In January 2013, Farrington fell and broke her thumb during a training run in Quebec, Canada. The injury required surgery but she was back on a snowboard the next day wearing a cast. 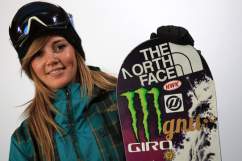 Kaitlyn Farrington Wins Gold: The Photos You Need to See