Image provided by the NOAA shows the next storm to hit the south.(Getty)

After an already harsh winter, even more bad weather is threatening to pummel Atlanta and the surrounding region. On Tuesday, Winter Storm “Pax” descended on the South causing icy conditions and treacherous temperatures.

Earlier this month, 2 inches of snow brought Atlanta roads and transit to a dead standstill; now the Weather Channel is predicting over half an inch of solid ice to coat the streets.

For this reason, the Weather Channel advises that people do not leave their homes or attempt to travel after midnight on Tuesday into Wednesday.

On Monday evening, the city of Atlanta, as well as all schools in Cobb and Fulton counties, announced that all public schools would be closed both Tuesday, February 11, and Wednesday, February 12. Decatur schools were also closed on Tuesday.

3. Over 500 Flights to Atlanta Have Been Canceled

The Atlanta Journal Constitution is reporting that Delta, whose major hub is the Hartsfield-Jackson International Airport in Atlanta, has canceled almost 600 flight amid the threat of Winter Storm Pax.

More than 2,000 flights in total to and from Atlanta and the surrounding regions have been canceled due to the inclement weather.

Along with icy roads and school cancelations, Atlanta residents are warned to expect a number of other difficulties and to take precautions.

The Weather Channel warns residents that power outages are to be expected as ice, debris, or falling trees sever power lines.

5. A State of Emergency Has Been Declared

In light of the problems Atlanta has already faced this year, President Obama declared a state of emergency in Georgia as a preemptive measure. The statement read:

Today, the President declared an emergency in the State of Georgia and ordered federal aid to supplement state and local response efforts due to the emergency conditions resulting from a severe winter storm beginning on February 10, 2014, and continuing.

Specifically, FEMA is authorized to identify, mobilize, and provide at its discretion, equipment and resources necessary to alleviate the impacts of the emergency. Emergency protective measures, limited to direct federal assistance, will be provided at 75 percent federal funding. 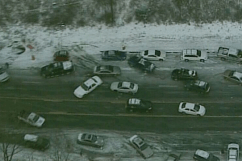 Atlanta Weather Disaster: The Pictures You Need to See