Ralph Wilson, the legendary owner of the Buffalo Bills, has died at the age of 95, reports The Buffalo News. Team president, Russ Brandon, announced the passing of Wilson at the NFL Annual Meeting on March 25. Brandon said upon announcing his death, “No one loved the game of football more than Ralph.” Former Bills coach Marv Levy once said about Wilson, “He got into the game not because he knew it would be a moneymaker but because he loved it.”

Ralph Wilson was the founder of the Buffalo Bills. He had previously stated that the team would not remain in his family after his death, reported ESPN back in 2009. In January 2013, Wilson gave full control of the team Russ Brandon.

One light remains on at Ralph Wilson Stadium tonight in memory of late #Bills owner. pic.twitter.com/XD40ypdBO0

2. Wilson is Originally From Detroit

He was a World War II veteran. He was native of Detroit, Michigan, and he maintained a residence in Michigan until his death. At one time, he was a minority shareholder with the Detroit Lions.

3. Ralph Wilson Was a Football Hall-of-Famer

He was inducted in the Pro Football Hall of Fame on August 8, 2009. Upon his induction, former Bills player Paul Maguire said about him, “He’s always understood that owners own, coaches coach, and players play. He always knew to stay in the background, as hard as it is for some owners to do.”

The thoughts and prayers of #RavensNation are with the @buffalobills family after the passing of owner Ralph Wilson. 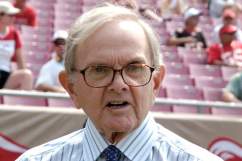 4. Wilson Had Health Problems in His Later Years

He suffered health problems over the past few years, including breaking his hip after a fall at home in July 2011. In 2012, he was hospitalized with an infection.

5. Wilson Was Also a Horsebreeder

In addition to his football activities, Wilson was also an accomplished horse breeder. The most famous horse he bred was Jim French, a winner of a Santa Anita derby in 1971.

Loading more stories
wpDiscuz
0
0
Would love your thoughts, please comment.x
()
x
| Reply
Ralph Wilson, the owner of the Buffalo Bills has died at the age of 95. Wilson was one of the founders of the AFL. Here's what you need to know.