There were breaking reports coming from local radio in the Canary Islands that a plane has crashed about two miles off of the popular tourist destination. The reports were confirmed to be false. The “plane” in question is actually a tugboat, according to the BBC.

1. Spanish Media Jumped on the Story that a Plane Had Crashed

2. The Coast Guard Are Reported to Have Made an Error

It now appears that the Coast Guard mistook a narrow ship for a plane stranded in the water. According to El Pais, it was a tugboat and another ship. An official statement from the local government read, “It’s not an airplane, it’s a big tugboat pulling a ship.”

3. This is the Anniversary of Spain’s Worst Plane Crash

Today is the 37th anniversary of the infamous Canary Island plane collision between two 747 jets that killed over 500 people.

4. The Spanish Government Have Confirmed That There Was Not Crash

Spanish authorities moved quickly to quash the reports of a crash. Spain’s Minister of Public Works, Ana Pastor, who happened to be on the Canary Islands, confirmed to reporters that there was no crash, reports El Pais. Reports of the crash spread like wildfire through social media.

5. There Are 8 Airports in the Canary Islands

The Canary Islands are one of the most popular sun-holiday destinations in the world. 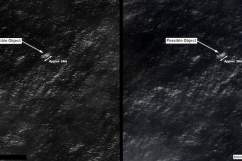 Loading more stories
wpDiscuz
1
0
Would love your thoughts, please comment.x
()
x
| Reply
The "plane" now appears to have been a ship.