This comes amid speculation that the front office is uncomfortable with Jackson’s perceived gang affiliations.

1. One of Jackson’s Friends Was Acquitted of Murdering a 14-Year-Old

Jackson has an association with two L.A. gang members who are involved in a 2010 homicide investigation. The two alleged Crips members shot and killed 14-year-old Taburi Watson on December 29, 2010, after witnesses said he flashed a rivals sign at them. Jackson is not directly involved in the case, as Jane Robison, a spokesman for the LA District Attorney’s Office, told NJ.com:

One of the alleged gang members, Theron Shakir, was charged with the murder of Watson. He’s also an aspiring rapper who recorded songs for Jackson’s Jaccpot records label. Shakir was acquitted of the murder in January 2013. Another associate, Marques Binns, was sentenced to 15 years on gun charges related to the case. After Shakir’s acquittal, he appeared beside Jackson in this Instagram pic:

He was even accused of making gang signs during a game against the Redskins in September 2013:

Jackson constantly updates his Instagram account with photos of himself and friends throwing up Crips gang signs:

The hand sign that Jackson makes is associated with the Rollin’ 40s Crips.

TMZ reported on March 10, that Jackson was a friend of rapper Nipsey Hussle, a known Rollin’ 60s Crips member. Even the name of Jackson’s label, “Jaccpot,” may have gang relations. Putting a “c” an “k” together in a word, like “jackpot,” could be perceived to mean “Crip Killer,” a term associated with the Bloods.

Sources told NJ.com, that the front office at the organization had become concerned with Jackson’s off-field behavior. Coach Chip Kelly did not see eye-to-eye with Jackson, and had questioned his star’s work ethic.

So far, this is the money quote from Chip Kelly: "I like DeSean, but we are going to do what's best for the team."

3. The Eagles Are Getting Nothing for Jackson

From the outside, releasing Jackson seems bizarre. By releasing him, rather than looking for a trade, the Eagles get nothing for their star wide receiver. In 2013, Jackson had one of his best seasons with 82 catches for 1,332 yards and nine touchdowns, this came on the back of signing a five year, $48.5 million contract in 2012.

Upon his release, Jackson released a statement:

First I would like to thank the Eagles organization, the Eagles fans and the city of Philadelphia for my time in Philly. I would also like to thank coach Andy Reid for bringing me in. Secondly, I would like to address the misleading and unfounded reports that my release has anything to do with any affiliation that has been speculated surrounding the company I keep off of the field.

I have worked tirelessly to give back to my community and have a positive impact on those in need. It is unfortunate that I now have to defend myself and my intentions. These reports are irresponsible and just not true . I look forward to working hard for my new team. God Bless.

After news of his release broke, Jackson posted this picture on Instagram:

According to reports, Jackson never really got over the loss of his father, Bill, to pancreatic cancer in 2005. That’s the opinion of Jackson’s high school coach, Raul Laura, who told The South Jersey Times:

The loss of his father was devastating for him. When his dad passed away, I think DeSean started to hang around some not-so-good people.

Coach Lara was a great influence on me. He kept us focused-he was a coach who cared about us about our schoolword, and our lives on and off the field. There’s not many coaches left in high school like that anymore.

5. The Aaron Hernandez Case Has Made NFL Teams Take Notice of Their Players’ Friends

Since Aaron Hernandez was arrested and charged with the murder of Odin Lloyd back in June 2013, NFL teams have been looking into their players off-field associations. Hernandez, once a star with the Patriots, now finds himself held in prison with bail for the murder of Lloyd. He may also face charges relating to a 2012 Boston homicide. After his arrest, revelations came out about Hernandez’s links to the Bloods gang in his hometown of Bristol, Connecticut. 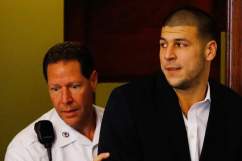 Loading more stories
wpDiscuz
0
0
Would love your thoughts, please comment.x
()
x
| Reply
Was the team scared of having its own Aaron Hernandez?