Donna Perry admits the killings were carried out by Douglas Perry, but says she is no longer that person and must not be held responsible for his actions.

Here’s what you need to know about this fascinating case:

1. Perry Underwent a Sex Change in 2000 & Says She Hasn’t Killed Since

According to records, Perry told cops that her violent streak ended when she underwent a sex change operation in Thailand in 2000. She told police that the operation would “control any violence” because when a man becomes a woman, there is a “very great turndown in violence.” She’s alleged to have told police, “Douglas didn’t stop, Donna stopped it.”

Cops arrested Perry in 2012 on firearms charges, and throughout the course of those investigations were able to formulate a link between her and the 1990 triple murder.

Shocking police documents emerged this week, made public by KHQ:

2. Douglas Perry Was Arrested With an Arsenal of Weapons in 1998

In 1988, Douglas Perry was arrested by the ATF after being found in a possession of a pipe bomb, 22 handguns, 27 rifles and 20,000 rounds of ammunition from Perry’s Spokane house. Perry has a long list of offenses, most related to weapon possession. In 1989, he was arrested for soliciting sex.

3. Confusion Around Her Sex Change Allowed Perry to Skip Court

Perry had been due to appear in court on March 17 in Spokane. Due to confusion regarding her sex change, Perry was able to avoid appearing. Spokane County Jail records had her held under her pre-op name of Douglas Perry. Defense attorney Anna Nordvedt told the media, “She’s not here because they have her listed under her prior name.”

Richard Brisbois, the brother of one of the victims, Kathleen Brisbois, was frustrated he didn’t get the chance to see Perry in court on March 17. He told The Spokesman, “That was quite aggravating.” But he did get to see his sister’s alleged killer the following day:

It was good to see and hear that (Perry’s) in jail and will be staying in jail. We’re all really happy to have some closure even after 24 years.

Kathleen Brisbois left behind three daughters when she died.

In police documents, it’s written that during a spell in prison Oregon in 1997, unnamed inmates told prison staff that Perry would talk about taking prostitutes home and feeding them. Criminal investigator Steve Sales was told by these inmates that they believed Perry was involved in the murder of prostitutes. She’s alleged to have also said that part of the motivation to murder came from the fact that she couldn’t breed. Her anger was directed toward women who could, some of whom she referred to as “pond scum.”

5. Douglas Perry Had a History of Being Associated With Prostitutes

In 1998, Douglas Perry was pulled over by cops in a red-light area of Spokane, and they found a knife and stun-gun on him. He told police he was in the area to help prostitutes “get off the street.” In one instance, Douglas Perry brought a prostitute back to his house, located at 2006 East Empire Avenue in Spokane (above), where she saw his vast collection of weapons. He told the girl that he wouldn’t hurt her because he liked her. The girl later gave a description of Perry to police. 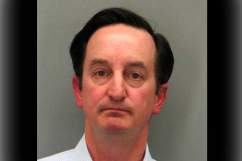