Dottie Sandusky, Jerry Sandusky‘s wife of 37 years, spoke to Today in one of the first interview’s since her husband was sentenced to 60 years in prison on 45 counts of sexual abuse.

In the full 50-minute interview, which you can watch above, Dottie Sandusky tells Matt Lauer that her husband is innocent and that there was no way sexual abuse could have occurred in their small Pennsylvania home with her there. However, in one of the most chilling parts of the interview, Dottie admits, “I believe he showered with children, and that’s the generation that Jerry grew up in.”

As the interview continues, Dottie expresses her beliefs that the alleged victims of her husbands sexual abuse were manipulated by lawyers and the promise of financial gain.

Lauer goes on to quote all of the media outlets that have called Dottie evil and a collaborator in the abuse. She smirks, talks about how strong of a spouse she is, and says, “If they want to say that, let them say that.” 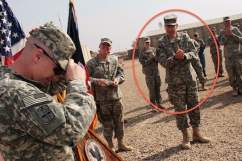