Lieutenant Edward J. Walsh, 43, has been named by authorities in Boston as one of the firefighters killed in the line of duty on March 26, reports The Boston Globe. The other was named as Michael Kennedy, 33.

The two died battling a devastating 9-alarm blaze that began in the basement of a building in the Back Bay neighborhood of Boston.

Here’s what you need to know about this fallen hero:

Walsh, from West Roxbury, was a married father of three children, two boys and one girl, reports CBS Boston. All of his kids are under the age of 10.

He was a nine year veteran of the Boston Fire Department. Like Kennedy, he worked out of the Engine 33 firehouse at the corner of Boylston and Hereford Streets. The station is located less than a mile from where the fire began.

He’s also a second generation fireman, following his father who was a lieutenant in Watertown. According to The Boston Globe, Walsh’s cousin, Tom, is a captain in the Watertown department. A superior described him as a “very competent fire officer. Took his men under his wing and was very, very hands-on.”

3. Tom Brady Has Paid Tribute to the Fallen Firefighters

4. One Friend Said That Walsh Could Play For the Celtics

The Boston Celtics show their respect to Lt. Ed Walsh and Michael Kennedy prior to last night’s game against the Raptors. (Getty)

Before joining the fire department, Walsh worked in finance. He was known as an avid basketball player in West Roxbury where he would play every Sunday. One of his Sunday team mates, former city councilor John M. Tobin told The Boston Globe:

He’s a big, tall, handsome guy. Just gigantic. If you didn’t know any better, you’d think he plays for the Celtics.

5. Nobody Who Lived in the Building Was Hurt

The fire has been described as moving so fast and burning “like a blow torch,” according to Boston Fire Deputy Chief Joseph Finn. In total, 13 other firefighters suffered non-life threatening injuries. Thanks to the heroic efforts of Walsh, Kennedy, and the other firefighters on scene, no residents of 298 Beacon Street, where the fire occurred, were injured. 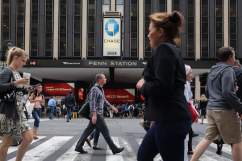 Rooftop on Fire Near Penn Station: 5 Fast Facts You Need to Know