Mark Sanchez has been released.

Mark Sanchez has been released by the New York Jets the team announced via their Twitter account on Friday afternoon.

Sanchez entered the NFL with the Jets in 2009.

Rex Ryan said about his release:

I’d like to thank Mark for everything he’s done for this team and me personally. We were rookies together and had some early success, becoming the first rookie head coach and quarterback to go to back-to-back championship games. We experienced a lot together and I really appreciate Mark. He’s a great player, a great teammate, and I wish him nothing but the best.

3. Statistically, One of the Worst QBs

According to ESPN, no QB has recorded a worse QPR than his 36.1.

4. Ryan Had Been Coy on His Future

Rex Ryan told the media an hour before releasing Sanchez that he could stay at the Meadowlands.

Michael Vick has been signed as his replacement. He’s inked a one-year, $5 million deal. 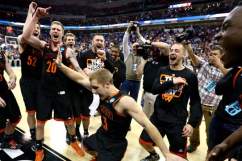 Read More
5 Fast Facts, Breaking News, Football, New York, NFL
It was rumored that the Jets would try to trade him.