At around 4 a.m. on Sunday March 16, 16-year-old Justin Casquejo snuck into the new World Trade Center and climbed as high as he could, capturing most of it in pictures and video. The New Jersey teen later confessed everything to the police.

Here is what you need to know about this illegal feat of daring:

Around 4 a.m., Casquejo climbed through a 12-inch-by-12-inch hole in the fence that surrounds the entirety of the World Trade Center grounds. From there he made his way to the building.

2. He Was Barely Detectable By Cameras

Police told the ABC that security cameras showed only “faint” evidence that Casquejo was even there. The teen told police that he was, “trying to be stealthy and avoid detection.”

One of the only things noticeable about Casquejo that night was the red blinking of his Go Pro camera, which was confiscated when he was arrested. It is unclear as to whether the footage will ever be released.

3. The Security Guard Was Sleeping

Once inside the building, the New York Post reports that Casquejo was given a ride by an elevator operator to the 88th floor. He then climbed the stairs up to the 104th floor where a security guard assigned to protect the area that is still under construction, was sound asleep.

From there the teen daredevil made his way to the roof, and finally the antenna. The sleeping guard has since been fired. 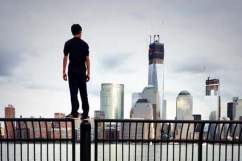 His Twitter account paints the picture of a teen in love with parkour and adventure. Above you can see him hanging from a crane, and on his account you can see him flipping into the Hudson River, and climbing onto some pretty high looking rooftops.

5. He’s Been Arrested & Is Being Charged

On his way down from the tower after sunrise, he was spotted by a construction worker and arrested by Port Authority police. He is being charged with misdemeanor trespassing. 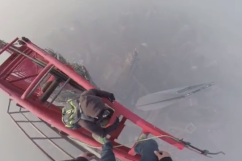 Loading more stories
wpDiscuz
0
0
Would love your thoughts, please comment.x
()
x
| Reply
Justin Casquejo is the teen who snuck to the top of the World Trade Center. Who is he and how did he do it?