The scene of the Serena Hotel shooting in 2009 (Getty)

Gunmen stormed into the Serena Hotel in Kabul, Afghanistan, reports Sky News. The hotel is considered the safest place to stay in Kabul say Sky News. The attacks came with many foreign observers in the country ahead of Afghanistan’s April 5 elections. There were four gunmen in the hotel, three of which were shot dead by cops, reports RT. The Taliban have claimed responsible for the attack.

1. The Hotel is Heavily Fortified

The Serena Hotel in Kabul. (Wikipedia)

The hotel is favored by diplomats, journalists and NGO workers who are based or staying in Kabul. The area around the hotel is heavily fortified. The Washington Post’s Pakistan Bureau Chief said that, “To get into Kabul Serena Hote, you would have to pass through two metal walls/gates, and numerous heavily armed guards.” Guests are locked in their rooms.

2. Shooting Erupted Inside the Building

Gunfire was heard coming from inside the hotel, according to reports from the ground. Journalist Abdullhaq Omeri has tweeted that “at least two injured. Sporadic gunfire still going on.”

3. Police Swarmed Around the Hotel

Local TV News is reporting that an extra police force has been deployed at the hotel. Former Afghan Army Special Forces Lt. Mustafa Kazemi has tweeted that “all the roads leading to any area in the vicinity of Kabul Serena Hotel have been blocked by Police.

4. There Were 4 Insurgents Inside

Road which goes to #Serena Hotel closed, just journalist and police are on the area pic.twitter.com/tDgvE0GBTo

Reports have varied, but it’s said that there are between 2-4 gunmen in the hotel. Abdulhaq Omeri, via his Twitter account, said that he men are “suicide attackers” and got access to the hotel via the restaurant, he added that the Deputy Minister of Interior has said there are three men armed with pistols in the hotel.

The hotel opened in November 2005 and is located in the heart of Kabul’s city center. (Getty)

The hotel has been subject to numerous previous attacks, most notably in 2008 when six people were murdered, including a Norwegian journalist. 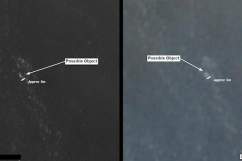 PHOTOS: Could These Satellite Images Be Missing Flight 370?